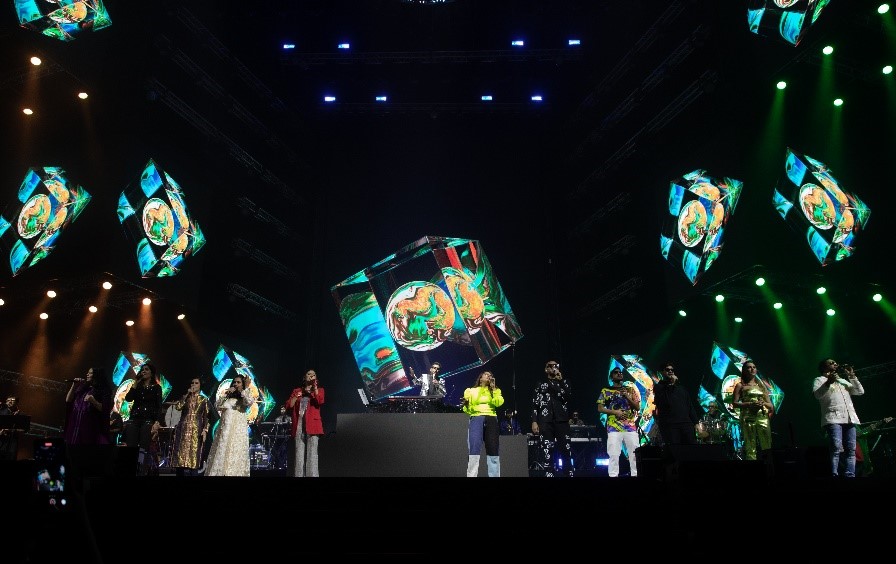 The concert garnered tremendous success and has become one of the biggest events to take place at YAS Island, Abu Dhabi. Rahman performed some of his iconic songs followed by the crowd that joined him to sing along. Fans from all over the world flew down to Abu Dhabi for the greatest show of the year.

The concert started with Rahman’s most celebrated patriotic song Jai Ho from the Oscar-winning movie Slumdog Millionaire. With this song, he introduced his ensemble of singers on stage including prominent singers in the industry like Haricharan, Benny Dayal, Madhushree, and Shwetha Mohan followed by Jiya Jale, Muqabala to Padakaali from the film Yodha by Benny Dayal and Haricharan. Chekka Chivantha Vaanam from the film Hayati sung by a Lebanese singer and some amazing Bollywood numbers like Param Sundari from Mimi, and Maahi Ve from Highway. The concert was a visual treat including songs in various languages including Hindi, Tamil, Malayalam, and even Arabic. The global icon with impeccable knowledge of music dedicated ragas from the Indian classical genre Raag-like Yaman, Madhukauns, Neelambari, Charukeshi to Bihag to Dharmavati, Etihad Arena was lit up like a Diwali celebration when the lights were turned off and the crowd waved with the music using their mobile phone torch which surely made everything dreamy. The concert was headed with some soulful and quintessential songs like Agar Tum Saath Ho from Tamasha, Kun Faya Kun from Rockstar, Dil Se Re, and to his recent blockbuster release Ponni Nadh from Ponniyin Selvan – I.

One of the most memorable moments from the concert was when Rahman performed alongside his son A.R. Ameen for the songs Miss Hairan from Heropanti with Nisa which left fans spellbound, followed by the song Taal Se Taal Mila by Haricharan. By the concert’s end, Rahman set the stage on fire with Humma Humma, head banging on Chaiyya Chaiyya to make the audience groove with Urvasi which ended with one of the most heart-melting song, Maa Tujhe Salaam leaving every soul with goosebumps.

Talking about the event, world-renowned music icon A. R. Rahman says, “It was an amazing experience performing at Yas Island, Abu Dhabi. The audience was amazing, and the energy the crowd had was so lively. Performing for live audiences always gives the artist a level of satisfaction as we get the responses there and then. I will be looking forward to performing here again in the future”.

From Jai Ho to his recent iconic songs to ending with Maa Tujhe Salaam, Rahman’s dynamic 30 years in the Music industry were glorified with much anticipation. The crowd was left mesmerized by hearing ARR singing along with the melodious elements to head-banging on songs which succeeded in keeping the crowd hooked and a night to remember for Etihad Arena, Yas Island Abu Dhabi.

ANGHAMI REBRANDS ON THE BACK OF LANDMARK NASDAQ LISTING