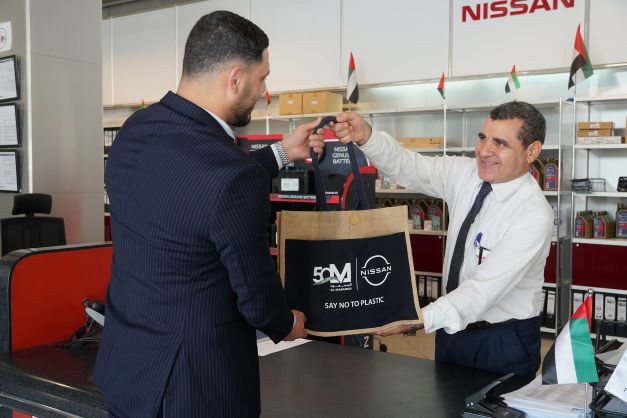 Abu Dhabi, September 30, 2022: Al Masaood Automobiles, the authorised distributor for Nissan in Abu Dhabi, Al Ain, and the Western Region, has launched a campaign titled ‘Say No to Plastic’, in support of Abu Dhabi’s wider initiative to help protect the environment by reducing the use of single-use plastic and promoting the usage of eco-friendly alternatives.

Aiming to promote sustainable practices in Nissan Abu Dhabi’s aftersales operations, the new campaign encourages Nissan customers of spare parts outlets to use organic jute bags while purchasing spare parts, instead of the previously utilised single-use plastic bags. Supporting the government on its environmental goals and initiatives, Al Masaood Automobiles Nissan has rolled out this campaign to contribute to the concerted efforts of transitioning to a clean and green future.

With a strong focus on environmental health and sustainability, the Abu Dhabi Government has passed on directives banning the use of single-use plastic on June 1st, 2022, under the emirate’s integrated Single-Use Plastic Policy. The ‘Say No to Plastic’ campaign aims to reduce the plastic waste generated by Al Masaood Automobiles, starting with the Nissan Aftersales Department. Running for a period of three months, the department will replace over 2,500 single-use plastic bags that were originally used for spare parts purchases with the organic Nissan-branded jute bags for every purchase that exceed a set minimum value. During this period, the company is expected to reduce the carbon footprint generated by single-use plastic bags by 3,950 kg of CO2 emissions.[1]

Marking the first step towards a bigger goal of eliminating single-use plastic bags across all its departments, the three-month ‘Say No to Plastic’ campaign also reflects Al Masaood Automobiles’ sustainability efforts, where the company’s QHSE team has successfully reduced the amount of landfill waste they used to produce by over four times in the span of a year and a half.

Irfan Tansel, Chief Executive Officer of Al Masaood Automobiles, said: “The alarming changes in the environment landscape has forced governments worldwide to take strong action against pollutants such as single-use plastic bags. At Al Masaood Automobiles Nissan, we place great emphasis on promoting the health and sustainability of the environment and making a positive impact – starting with our own internal practices. Our “Say No to Plastic” campaign is an effort to promote the use of organic materials in everyday lives and to contribute to the conservation of Abu Dhabi’s and the UAE’s ecosystem. Our principal brand Nissan has also placed sustainability at the core of its business and as an enabler toward the delivery of its long-term vision, Nissan Ambition 2030, which aims for a cleaner, safer, and more inclusive world.”

Under its Quality, Health, Safety and Environment Policy, Al Masaood Automobiles seeks to act as a role model in promoting a culture of excellence by applying various international standards like ISO 9001, ISO 14001, and ISO 45001. Under these standards, the company commits to the prevention of pollution and reducing the impact of its operations and processes on the environment. As a results of its sustainability efforts, Al Masaood Automobiles was the first automotive dealer in Abu Dhabi to be granted the ISO 45001:2018 certification by Bureau Veritas, in recognition of its efficient and effective quality, health, safety and environmental management systems and processes.