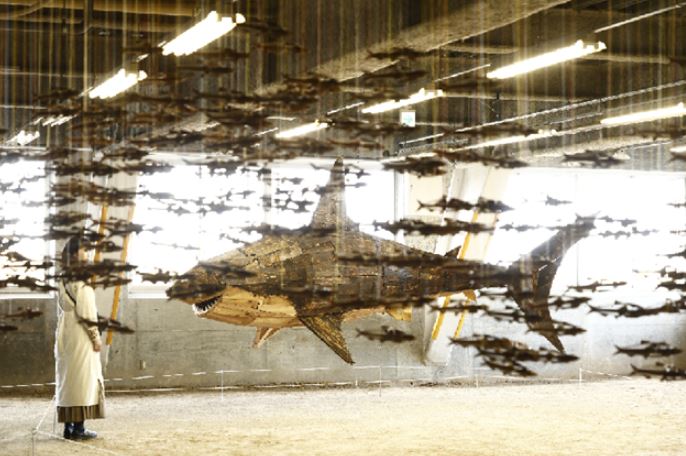 Japan’s art scene is as exciting as it is varied. No longer limited to the confines of urban landscapes, the country has seen pioneering projects bring art into rural areas too, giving visitors to Japan yet another reason to get out of the big cities and into the great outdoors. Here are four of our favourite art adventures in the Hokuriku area, from architecturally stylish museums to site-specific installations, and even art you can sleep in.

In Kanazawa City lies a museum where the architecture is as inspiring as the artistic treasures held within. A circular structure filled with light, the 21st Century Museum of Contemporary Art, Kanazawa was designed by Pritzker Prize-winning Japanese architecture studio SANAA, and won a Golden Lion award at the 9th Venice Biennale International Architecture Exhibition in 2004.

Located in the centre of the city, the circular museum is designed as a park, surrounded by greenery and with a focus on brightness, with skylights illuminating the space’s courtyards with natural light.

But while the space itself may be an artistic achievement, most visitors return for the engaging exhibitions held within. The museum’s permanent collection includes standouts such as Anish Kapoor’s L’Origine du Monde, a work that challenges the viewer’s perception with what appears at first glance to be a sculptural work, revealing itself to be a hole upon further inspection. Leandro Erlich’s Swimming Poolis a playful piece that looks like a pool. Visitors can stand underneath the water and look up, or look down at the people in the chamber below. It’s equally loved by adults and children, and corresponds to the museum’s aim to be an open classroom for children where they can see, touch and experience art.

The museum also has an exceptional calendar of temporary exhibitions that give visitors a reason to keep coming back. Running until March 5, 2023 is The Timeless Imagination of Yves Klein: Uncertainty and the Immateriality, a showcase of works from the 1950s and 1960s by the French artist who had a profound influence on future generations of artists.

Pro Tip – Don’t forget to head out into the gardens to look for the two historical tea houses with traditional paper screens, tatami floor mats and sliding doors that open onto the surrounding plants and trees.

In Japan there’s a belief that imperfection can also be perfect. The tradition of Kintsugi– or repairing broken things with lacquer and gold powder – is testament to this belief, and proof that even something that is broken can be beautiful. In fact, it’s such a popular technique that it’s been practiced in Japan for more than 500 years.

Dating back to more frugal – and more sustainable – times when, rather than throwing out a broken item, people would mend it, kintsugi is experiencing a new popularity.

Visitors to Yamanaka Onsen in Ishikawa Prefecture can take part in a kintsugi workshop with Deeper Japan to understand more about the technique from a father-and-son lacquer artist pair in their studio. The four-hour session includes an introduction into the tradition and techniques of kintsugi, after which visitors can choose a ceramic item to dust with gold powder, and complete the last step of the process with the master. After drying, the piece is ready to take home.

Pro-tip – If you have a much-loved piece of pottery that is chipped or broken, you can also have it repaired at the studio. The item will need to be delivered to the studio two months in advance of the experience date.

Every three years, the Echigo Tsumari Art Triennale brings art-lovers from across Japan and around the world to Niigata’s Tokamachi region. But art isn’t new here. This area has been producing pottery and textiles for centuries, and a rich tradition of craftsmanship runs through the region’s culture. Like many parts of rural Japan, the population here was falling and ageing, and art is once again bringing energy to the area.

The current iteration of the Triennale runs until November 13, 2022, but visitors can also see more than 200 site-specific permanent works year-round in the Echigo Tsumari Art Field, some of which are located in urban environments and abandoned buildings, while others are in the deep countryside, surrounded by rice fields and forest. And while the name “field” may make you think it’s a small area, the overall site spreads over a vast 760 square kilometres.

One of the most popular year-round artworks is the spectacular Tunnel of Light, a reimagining of a 750-metre tunnel above the Kiyotsu Gorge by MAD Architects. The rock-hewn tunnel looks out over a tree-covered canyon and river, and the full length of the tunnel has been turned into an elongated art venue featuring different installations, including coloured lights, mirrors, a reflective pod housing a restroom, and the grand finale, the Light Cave, where a layer of water and mirrors reflect the light at the end of the tunnel and the views out over the valley. It’s an interactive art piece – walk through the water, and you’ll become part of the art itself.

Pro Tip – the tunnel is open year-round but closed on Tuesdays and Wednesdays (the following days if they fall on a public holiday) so check the calendar carefully before planning your trip.

James Turrell’s art works incorporating light and nature are loved the world over, but in Japan, you can actually sleep inside one of them. The House of Light, part of Echigo Tsumari’s Art Field offerings, was originally designed as part of the first 2000 Art Triennial, and was inspired by Junichiro Tanizaki’s book In Praise of Shadows. Designed as a meditation space, the house is built in the traditional architectural style of the region, and has a retractable roof, opening up to the sky, a signature feature of many of Turrell’s works.

The interior space includes sleeping rooms and Japanese design touches, such as shoji paper screens and tokonoma alcoves, and is described by Turrell as being his Western approach to Japanese culture. The house can be booked exclusively or shared with other visitors, and for those who don’t want to stay overnight, it’s also open to daytime visitors.

But to feel as if you’re part of the art, an overnight stay can’t be beaten.