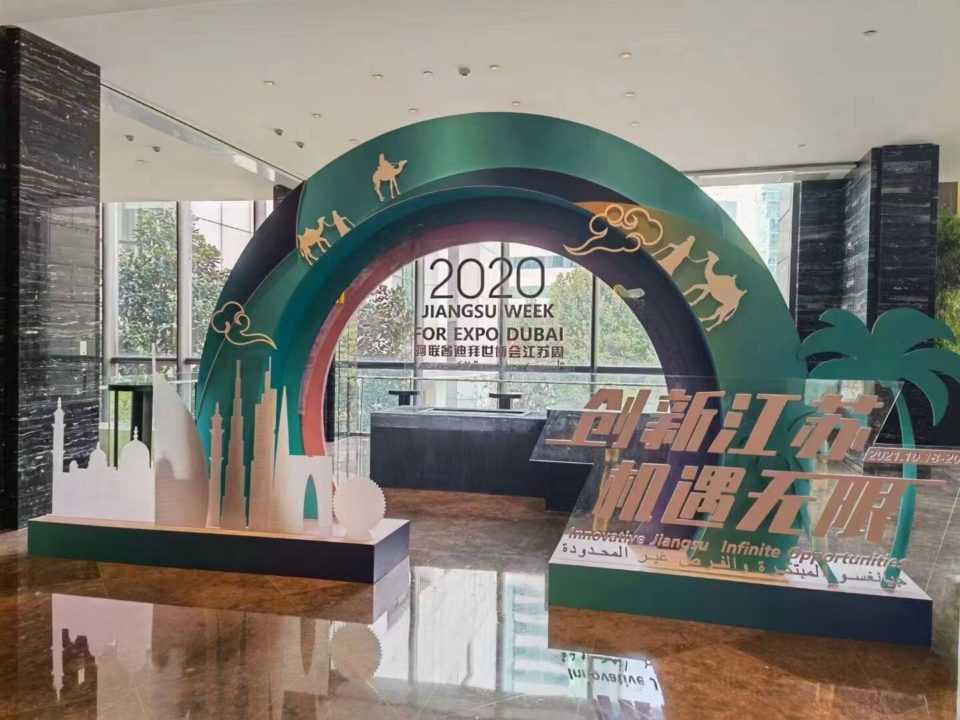 Dubai, United Arab Emirates – 2 November 2021. The Promotion Seminar of China-UAE Industrial Capacity Cooperation Demonstration Zone was held online on October 19 as a part of a series of activities for Jiangsu Week during the Expo 2020 Dubai. The occasion mainly showed the achievements Jiangsu had made by leveraging its position as the intersection of the Belt and Road cooperation, and focused on promoting China-UAE Industrial Capacity Cooperation Demonstration Zone (ICCDZ), a major Belt and Road cooperation project between China and the United Arab Emirates (UAE). Ambassador of the United Arab Emirates to China Ali Al Dhaheri, Deputy Director General of the Department of Foreign Capital and Overseas Investment of the National Development and Reform Commission of the People’s Republic of China Zhang Jianhua, Director General of Jiangsu Development and Reform Commission Li Kanzhen, Head of Industrial Cities and FZ Cluster of Abu Dhabi Ports Abdullah Al Hameli, and Chairman of China Jiangsu International Song Qinbo attended and addressed the event. More than 300 people participated in the online meeting, including member agencies of the Work Leading Group for the Expo 2020 Dubai Jiangsu Week, relevant institutions at home and abroad, representatives of key “Going Out” enterprises, representatives of Chinese enterprises in the Middle East and North Africa, and representatives of some enterprises from the UAE and neighboring countries and regions. Nearly 60 thousand people watched the live broadcast.

Ali Al Dhaheri, Ambassador of the UAE to China, pointed out in his speech that since the establishment of diplomatic relations between the UAE and China, the economic and trade ties between the two sides have become closer and closer. It is expected that the two countries will build on the success of China-UAE Industrial Capacity Cooperation Demonstration Zone to set up more cooperation demonstration projects.

Zhang Jianhua, Deputy Director General of the Department of Foreign Capital and Overseas Investment of the National Development and Reform Commission of the People’s Republic of China, noted that high-quality Belt and Road cooperation is a practical need for strong and inclusive growth of the world economy. As an important platform for Belt and Road cooperation between China and the UAE, ICCDZ plays an increasingly greater role for the substantial and deeper practical cooperation between the two countries. ICCDZ should earnestly play a bridging role to find more ways for industrial cooperation between the two countries, and use the “Chinese experience” in the construction of industrial parks to explore new models for overseas industrial parks.

Li Kanzhen, Director General of Jiangsu Development and Reform Commission, expressed that Jiangsu will leverage its position as the intersection of the Belt and Road cooperation, work with the UAE to build ICCDZ as a platform, take bigger steps in industrial scientific and technological innovation and people-to-people exchanges and cooperation, and join hands to address risks and challenges such as the COVID-19 to achieve mutual benefits, win-win results and common development.

Song Qinbo, Chairman of China Jiangsu International, expressed appreciations to the two governments and all sectors of society for their support to ICCDZ, and that further efforts will be made to pool resources for ICCDZ’s high-quality development with the view to setting up an exemplary case for Belt and Road cooperation.

As one of the countries with the best business environment in the world, the UAE is vigorously developing the non-oil economy and promoting economic transformation, which provides opportunities for the international development of Chinese enterprises. As a key project of Belt and Road cooperation between the two countries, ICCDZ makes vigorous efforts to play its bridging role to build a high-quality carrier for the overseas development of Chinese enterprises and make contributions to promoting the new pattern of development featuring positive interplay between domestic circulation and international circulation.

It is learned that ICCDZ took the stage at the opening ceremony of the Expo 2020 Dubai Jiangsu Week in recent days and signed a number of cooperation agreements, including an MOU with the College of Business and Economics of the UAE University, a framework agreement of “China-UAE Industrial Capacity Cooperation Demonstration Zone—Zheng He Vocational Education and Training Center” with Jiangsu Provincial Department of Education, and investment agreements with the ICCDZ’s new settlers.