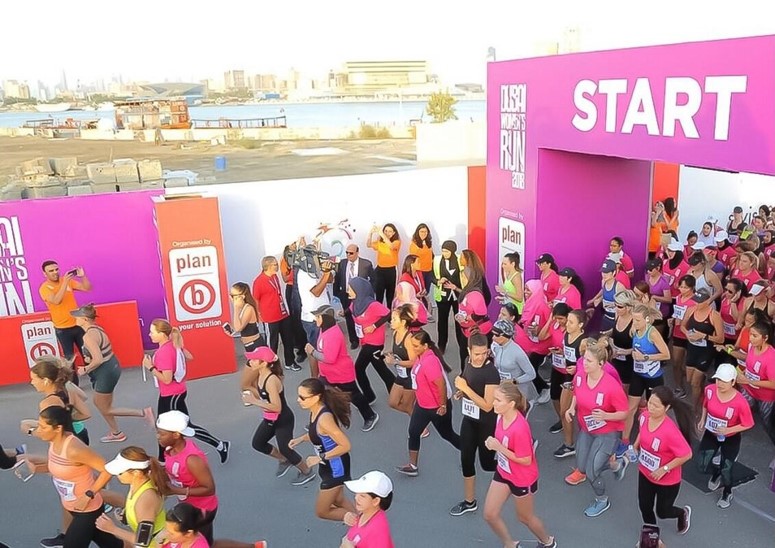 Under the patronage of H.H Sheikh Mansoor Bin Mohammed bin Rashid Al Maktoum, Dubai Women’s Run, the largest sporting event for women in the Arab world, is back for its 9th edition and is set to take place on 13th November 2022 at the iconic Bluewaters Island in Dubai.

This year’s iteration of the prestigious run, organised by Plan b Group in collaboration with the UAE Athletics Federation and Dubai Sports Council, will witness over 6,000 women from all walks of life partake in the 10km and 5km race, as well as a 3km fun run/walk. The event is open to women and girls from the ages of 12, while the little ones, between the ages of 8 and 12 can also take part, if accompanied by an adult.

The Dubai Women’s Run is the first initiative in the Middle East that celebrates the zeal & zest of women in the region, embodying their enduring spirit. The event over the years has grown, attracting not only local and regional but international participation as well.

Registrations for the run are underway, with slots already filling up. An expected strength of 6,000 participants, including women from all walks of life, different age groups, and multicultural backgrounds, are readying themselves to compete in the event. The registration fee starts from AED 100 and will close at 11:59 PM on 6th November 2022.

As races commence at 7 AM, participants this year can soak in views of Dubai’s emblematic skyline and the Arabian Gulf as they pace themselves through the stylish Bluewaters Island, home to some of the city’s most original retail concepts and attractions, including the glamorous Ain Dubai.

The run has been a regular fixture on the UAE’s sporting calendar since 2010 but is returning for the first time since the Covid pandemic. The event has garnered the attention of many celebrities, including famous Bollywood actor Sanjay Dutt who has confirmed his support for the event.

Dr. Harmeek Singh, Chairman and Founder of Plan b Group, said, “Being a part of the ninth edition is an achievement for Plan B and speaks volumes for Dubai, which has been the frontrunner for equality. Undoubtedly, Dubai Women’s Run stands tall as a resilient message regionally and globally. I stand by the vision that our able leaders have infused in all of us, and in my capacity, backed by a passionate team, we are here to revive the initiative of Dubai Women’s Run on a bigger and better platform.”

The vibrant day will be full of entertainment activities for the entire family that will take place alongside the event. Families can compound their fun by attending the entertainment extravaganza, including cultural performances, children’s activities, and a DJ to energise the atmosphere during the entirety of the event.

“We are pleased that women of various nationalities, including amateurs and professionals, will participate in the race. Female runners from our national team are among the participants in the 10 km category, competing with international runners, allowing us to develop and continue to compete in different competitive races,” said Fawzia Faridoon, Manager of Women Sports Development at Dubai Sports Council.

Since taking over the race reins in 2017, Plan b Group has made the event the most promising and significant race for women in the Arab world. It has taken it to a stature that has placed it among the most popular races on the international sporting scene.

This year’s run has garnered the support of various entities, including reputable socio-civic organisations that will also be running the race to support charitable causes in the UAE.

Major General Dr. Mohamed Abdullah Al Murr, President of the UAE Athletics Federation, added, “The racing level will have a special character. It can elicit a great level of excitement and strong competition, in line with the vision of the Athletics Federation to reach the game’s horizons. Because the winner, in the end, is the woman who enhances her prestigious position in society. Women’s sport embodies women’s commitment to ensure a productive and happy life for herself and the community around her.”

Ring Announces Mindware as Distributor for the UAE and Gulf Countries