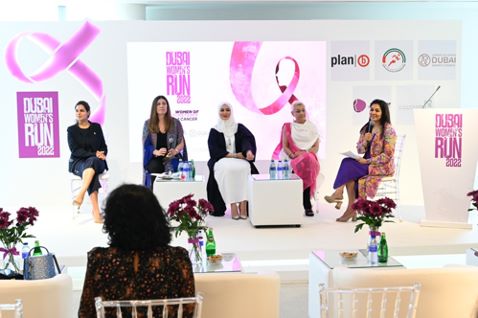 Under the patronage of H.H Sheikh Mansoor Bin Mohammed bin Rashid Al Maktoum, Dubai Women’s Run, the largest sporting event for women in the Arab world, is back for its 9th edition and is set to take place on 13th November 2022 at the iconic Bluewaters Island in Dubai.

Organized by Plan b group, in partnership with Dubai Sports Council, UAE Athletics Federation, & Al Jalila Foundation, Women of Substance initiative contributes to the community’s aspect for the platform, where it welcomes nine prolific women who have made significant contributions to society. This year, these nine women of substance come together to join hands in support of raising awareness for Breast Cancer, coagulating their network, passion and resources to voice concerns & share inspiration across the region for women afflicted with the condition, through engaging panel discussions, keynote speeches & sharing fulfilling personal experiences.

This year’s campaign will have 9 women supporting the cause who will work in tandem to spread the word about breast cancer. The prolific line up of consists of women across ages, ethnicities & professional backgrounds, much like the concept of Dubai Women’s Run that celebrates the spirit of womanhood all through.

In addition to these 9 women, Vonita Singh, will lead the charge digitally through the event’s Virtual Run as a Women of Substance, encouraging those who are unable to attend in person to partake in this amazing event and get access to all the souvenirs, from the comfort of their homes.

Maya Al Hawary is an inspirational Emirati Educator and the first PHD scholar to research emotional intelligence and its effect on leadership in the United Arab Emirates.  She’s the Chairperson of the board of governors of Dubai Carmel School & trains government employees on building leadership skills. Maya was awarded the Ambassador of knowledge for her volunteer work with the Red Crescent and was chosen as one of 50 social media icons and influencers to represent the year of tolerance, as a tolerant knight.

Helen is a serial entrepreneur and wears many different hats. She’s a speaker, founder, publisher and editor in chief. She’s the MD/CEO of Sholskoncept Event Management Company, The Executive Publisher of Ladies in business Magazine, Managing Director of Luxury flats Apartment and also Founder of the Business Innovation Academy.

Yuliana Grasman is modern poetry writer. She is the first woman in freestyle drift as a drifter with 4×4 and the First Woman to Drive 4×4 on 2wheels in the World’s history. She is now a VR racer and has won many accolades in her career. She has acted in popular feature films like the Indian movie –  ‘Zero’ with Shahrukh Khan & an Emirati film – ‘Unbeatable fighter’ among others.

Fouzeya heads up the women sports wing at Dubai Sports Council. Throughout her extensive career in the sporting world, she has focused her efforts on successfully bringing about an awareness and enthusiasm amongst Emirati women towards importance of fitness, physical well-being and self.

Amira is a fitness coach and breast cancer survivor. From her own experience she has understood the importance of physical and mental well-being and has become a huge advocate of that. Her earlier association with DWR in 2018 helped build her spirit and fight cancer & now works with other women fighting cancer.

A voice so melodious, it created waves across the country. At only 12 years of age, Mira Singh is already a household name. The Expo 2020’s star performer (Ray of Hope) has many talents to her name including that of being a painter, dancer, singer, ballerina, actor  performer. A true inspiration!

Hana Al Nabulsi, a 26-year-old Triathlete is the youngest Emirati to complete the “Iron Man” 70.3 race in Mexico with a duration of 7 hours and 9 minutes. She is an ITU qualifier. From a past in running onto the triathlon world; to the path of one day becoming a pro triathlete to compete globally.

Suhaila is the Executive Director at Dubai Economy and Tourism Department. A strategic leader with a verifiable track record of experience, delivering exceptional results in highly competitive market across Event industry as an Emirati Woman. She is a recognized Strategic Change Driver and Award-Winning Director; hold credentials in attaining several laurels, including the recent recognition as FEMINA Women achievers award for 2015 besides hand holding the government sector, specifically Dubai Festivals and Retail Establishment (an agency of Dubai Tourism) in winning back-to-back awards for Dubai being the city of Festivals in 2011, 2012 and 2014.

Vonita is the Founder and creator of Movement Mantra, a platform to tap into the therapeutic power of mindful movements. Using the technical rigor and experience gained during and after my Ph.D. (Anthropology), coupled with a lifetime devoted to Indian classical dance, this platform has successfully and directly reached out to several people and their families suffering from Parkinson’s in the UAE and brought about a positive impact.

Dr. Harmeek Singh, Chairman and Founder of Plan b Group, said, “Being an integral part of the platform that providees equal footing to all nationalities, faiths, & ethnicities, which is a true representation of Dubai & UAE as a whole. Undoubtedly, Dubai Women’s Run stands tall as a resilient message regionally and globally. I stand by the vision that our able leaders have infused in all of us, and in my capacity, backed by a passionate team and the support of our incredible ambassadors we are here to revive the initiative of Dubai Women’s Run on a bigger and better platform.”

The event has also garnered the support of Bollywood actor Sanjay Dutt who is posing as ambassador for the run along with Maanyata Dutt. The run is set to take place on 13 November 2022 with an expected strength of 6,000 women at Bluewaters Island Dubai.