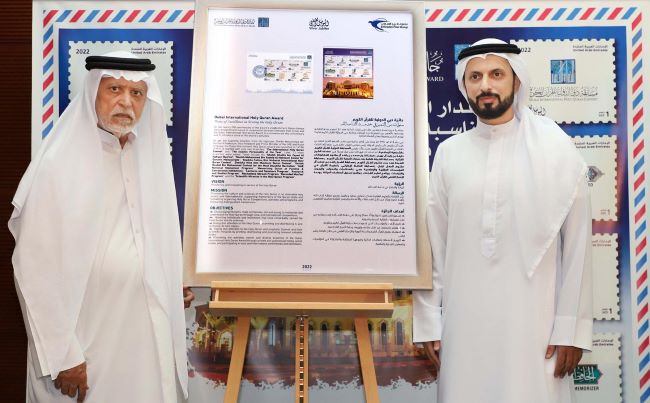 Obaid Mohammed Al Qatami, Chief Corporate Affairs Officer at Emirates Post Group, said: “We are honoured to collaborate with the Dubai International Holy Quran Award to issue this stamp in celebration of the award’s 25th anniversary, as well as its noble mission and role in the service of the Holy Quran and its study. This is consistent with our commitment to support the cultural contributions, projects, and initiatives that the UAE is spearheading by preserving them in the chronicles of human history and raising awareness on their importance through commemorative stamps.”

Al Qatami added: “Commemorative stamps are effective tools for cultural documentation of major events and occasions, and we, at Emirates Post Group, are keen on issuing them to celebrate such occasions. We take great pride in promoting this award, which is one of the most important Holy Quran awards and competitions worldwide. In addition to encouraging and supporting individuals who have memorised the Holy Quran (Huffaz) through competitions and activities, and recognising those who excel, we are also proud to highlight its role to the development of Holy Quran culture and studies locally, regionally, and internationally.

Ahmed Al Zahid, Member of the Organizing Committee and Award Spokesperson, said: “We are celebrating the 25th anniversary of the award which was established as per the directives of H.H. Sheikh Mohammed bin Rashid Al Maktoum, Vice President and Prime

Minister of the UAE and Ruler of Dubai, and we are thankful to him, and pray to Allah to protect him and bless him for introducing the world to such an exceptional gift by establishing an international award that highlights the significance of the Holy Quran and recognises and honours those who memorise it from all ages and nationalities.

Al Zahid added that the organising committee prepared a diverse program to celebrate the silver jubilee of the award in line with the directives of Ibrahim Mohammed Bu Melha, Advisor of the Ruler of Dubai for Cultural and Humanitarian Affairs and Chairman of the Award. The celebration included the collaboration with Emirates Post Group, through which the commemorative stamp was issued.

Find extra ways to earn money to navigate through this pandemic

Is Zimbabwe extending an olive branch to its white farmers?