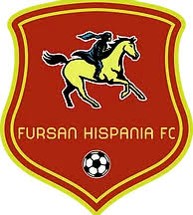 The UAE’s passionate national and expatriate amateur football players now have an exciting route to a professional career following the formation of a new football club in the country.

Fursan Hispania FC –  a new entrant to the UAE’s Second Division League – is a grass roots club that aims to help dedicated amateurs of the ‘beautiful game’ achieve their dreams of playing at an official level.

Created and led by Spanish football legend Michel Salgado who spent over a decade playing for Real Madrid – FIFA Club of the 20th Century and the most successful team in European Cup history – Fursan Hispania FC was formed with the objective of providing a route for amateur players, both Emirati and expatriate, to play in an established UAE Football Association team.

Fursan Hispania FC is a new challenge born from a previous Football Academy run by Salgado and his team that was based in Dubai Sports City.

With its training methodology grounded in Spain and adapted to Dubai, the academy has a proven track record of obtaining the best results for its students, who range from two years-of-age upwards.

After seven years of successfully developing the academy, Salgado decided to take on a new project with his new partner Faisal Belhoul by building a real football club to take part in official UAE competitions.

Commenting on the initiative, Salgado revealed how the club got its name and described the philosophy behind its foundation.

“We decided to give our new club an Arabic name as a gesture to our new country, as it is fair to say the UAE made us what we are today. ‘Fursan Hispania’ translates as ‘Spanish Knights’ – we think this badge and name represents what we are aspiring to… running long miles and fighting together with our Spanish love and passion for the game as our main weapon,” he said.

“Dubai means diversity and since we landed seven years ago from Spain we realised that this was a special place. We have more than 30 nationalities in our academy and all of them are connected through the same emotional connection to the game. The first team is a clear example of this, with players from Lebanon, Morocco, Spain, Sudan, Nigeria, the UAE… a great group of players that represent a big family of nationalities belonging to the same badge: Fursan Hispania FC,” he added.

Starting from zero in August, the club faced a number of obstacles in getting off the ground, not least because of the Covid-19 situation.

However, thanks to the perseverance and commitment of Michel Salgado and Belhoul, Fursan Hispania FC was able to become a reality in just four months and compete in this season’s UAE Second Division competition.

On his part, Faisal Belhoul, chairman of Fursan Hispania FC, explained that Fursan Hispania FC aims to give its players the chance to play professionally but that its philosophy represents more than just a footballing concept.

He said that the focus of both the team and the academy extends beyond developing ball skills and promoting fitness and that it has the potential to create future leaders through its focus on teamwork and encouraging a culture of effort, resilience and hard work.

“Our main goal is to continue developing our players so that they can progress to the first team in the long run. The first team means having the chance to play professional football in the UAE, or be exposed to other leagues that could be attractive to them for their personal football careers. This process to achieve the first team will grow them into competitive, educated and balanced people, which is exactly what our life requires today. We develop people first and players second,” he said.

“Football is a huge passion for expats in the UAE as well as for young Emiratis. With a third of the country’s population aged under 25 years, there is a fantastic opportunity to use football training to teach the soft skills needed to help create the leaders of the future. Not only does football training and competitive playing develop fitness and ball skills, it teaches the importance of fair play, sacrifice and rising to meet every challenge. What is learned on the pitch can be transferred to the real world, so it is no exaggeration to say that football has the power to develop the nation,” he added.

Fursan Hispania FC plays its second game of the season on January 9 at The Sevens Stadium at 7:30pm, which will be the club’s first home game The team is hoping to get 2021 off to a good start after losing their first match of the season – the club’s first ever competitive match – against Liwa 1-0 on December 5.

“Unfortunately, we lost our first ever game, but the attitude and effort from all the players were fantastic. We deserved better but in the end it was a good learning experience for all of us. The level of expectation was high and there were many people watching our live streaming, which actually make us feel we are growing a very positive fan group. The next match against City FC on January 9 will be our first match at home and we hope to put on a great display and performance for our fans to enjoy and our academy players to learn from,” added Belhoul.

Hamilton says Verstappen ‘feels he has a lot to prove’

Disinfect balls and corner flags, no tackling and no food: The new training rules for the Premier League

CELEBRATE THE JUNE PARTIES IN BRAZIL