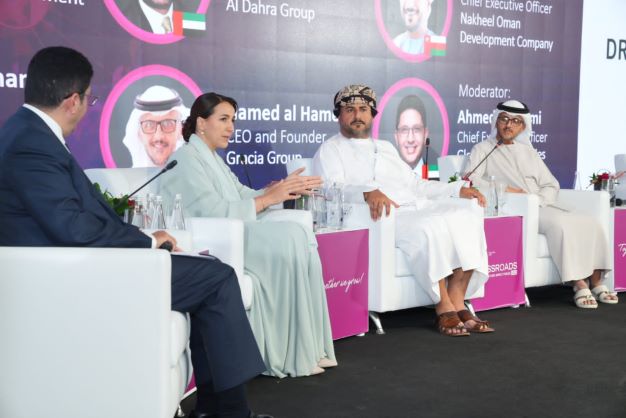 “The UAE enjoys stable food security despite importing more than 90% of its food needs, H.E. said “during a session entitled Food Security Strategy in the GCC.

“Given their privileged location and the vast infrastructure that it has, the UAE and the GCC countries have the ability to play a prominent global role in the food trade”.

“Through food technology and closed production systems, there will be also great opportunities to increase food production despite the lack of sufficient water and arable land. The UAE and the region should also diversify import sources in anticipation of any changes,”: she added.

Her Excellency said that strengthening community involvement in promoting food security is critical and can be implemented by changing food consumption behaviours and reducing food waste, which contributes to food sustainability.

“While the Sultanate of Oman and Saudi Arabia have many advantages compared to the rest of the countries in the region, which are the abundance of water and arable land, there are great opportunities for cooperation in food trade between the GCC countries,” he said.

Samah Mohamed Al Hajeri, Director of Co-operatives & Strategic Reserve, at the UAE Ministry of Economy said that there are many factors that affect global food security, therefore the developing policies that support food security, from pricing, import, export, financing, establishing agricultural projects are important to meet the food needs and priorities of the GCC countries.

“The food industry has always been linked to many elements, from production processes and quality control to the consumer. Therefore, expanding the market and building a highly competitive agricultural sector requires us to redouble efforts to market farmers’ products and support agricultural entrepreneurship,” he said.

The Future of Digital Economy

His Excellency Omar Sultan Al Olama. UAE Minister of State for Artificial Intelligence, Digital Economy and Remote Work Applications said that the digital sector in the GCC today has developed and is stable compared to the past ten years, where it reaped a minimal income.

H.E. said that the UAE has seen a major increase in the number of digital companies opening offices over the past five years because of increased belief in the country and the GCC region’s power of attracting leading digital talent.

Speaking at the forum’s ‘Digital Economy: Are We Getting It Right?’ session, he said that the UAE was now home to at least eight unicorns — start-up companies each valued at over US$1 billion — and the country was ensuring the digital ecosystem was conducive to significantly increasing this number.

“We are just at the beginning and our regulations are great, but we always need to reinvent ourselves and we need to be leaders, not followers when it comes to setting the right regulations to ensure what that can be deployed elsewhere, can be deployed here first,” H.E. said.

The UAE is experiencing digital success because of its geographical location, a time zone that is attractive to mobile digital talent and a business-friendly environment, H.E. added, these factors play an important role in allowing the UAE to compete internationally and be a global leader in the sector.

Also addressing the session was J.K. Khalil, General Manager, MENA East, Mastercard, UAE, who said the GCC region was in the right position with the right infrastructure to provide the most up-to-date payment solutions and necessary cyber security.

Fintech and the digital banking wallet were becoming increasingly important along with other digital financial services and in the GCC region there is a lot of interest with many new players in the field as well as increased funding. The region will be at the forefront of digital payment he said.

JLL strengthens its smart building and sustainability offering with WiredScore, enabling a smarter future for real estate in the Middle East