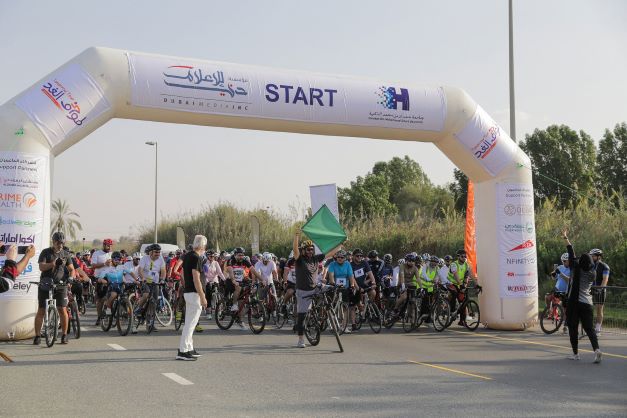 15 November 2022- TheHamdan Bin Mohammed Smart University (HBMSU) and Dubai Media Incorporated organised the Tomorrow Tour cycling event, as part of the ongoing Dubai Fitness Challenge launched by HH Sheikh Hamdan bin Mohammed bin Rashid Al Maktoum, Crown Prince of Dubai and Chairman of The Executive Council of Dubai. The event was held at Hamdan Bin Mohammed Smart University for the first time and it was also the first event led by a university in the emirate in partnership with various government and private sectors, as part of the university’s growing interest in promoting the values ​​of social responsibility and activating one of its core values of “Together We Grow”, as well as the importance of toward towards sustainable communities to enhance the adoption of a healthy and active lifestyle. The event, which was held in collaboration with the Dubai Sports Council under the theme ‘Tomorrow Tour…Race to the Future,’ aimed to create awareness among all members of society on the significance of physical fitness and a healthy lifestyle.

H.E. Dr. Mansoor Al Awar, Chancellor of Hamdan Bin Mohammed Smart University, said: “The support and directives of HH Sheikh Hamdan bin Mohammed bin Rashid Al Maktoum, Crown Prince of Dubai and Chairman of The Executive Council of Dubai, have made the Dubai Fitness Challenge a unique event in Dubai that greatly contributes to encouraging the community to maintain a healthy lifestyle and engage in physical activities, as well as shaping a culture of healthy habits. The event is held at the HBMSU campus, which had earned a WELL Health Safety Rating, the leading global standard for excellence ensuring the highest levels of health, safety, and security, reflecting the university’s position as an inspiring model for supporting the concept of quality of life in studying and working environments. At HBMSU, we are keen to create a sustainable and integrated environment that caters to all aspects of health and wellbeing within its campus. We also aim to encourage society members to participate in sporting events and activities, in partnership with government and private sectors, thus contributing to encouraging Dubai’s residents to maintain a healthier and more active lifestyle and solidifying its position as one of the best cities in the world to live, work, and visit.”

For his part, Abdullah Al Mansouri, Director Corporate Support Department at Dubai Media Incorporated, said: “We are pleased to collaborate with Hamdan Bin Mohammed Smart University and the Dubai Sports Council to organise the Tomorrow Tour event. In keeping with our commitment to build a culture of sports and improve societal performance to create a community that is healthier and happier, Dubai Media Incorporated constantly strives to shape innovative campaigns and sponsor major sporting events. We are pleased to have played a role in this event and look forward to developing more similar initiatives to promote a healthy and active lifestyle.”

The tour began at the HBMSU headquarters and progressed through the Academic City, from 3:30 pm to 5:30 pm. The event allowed families and children to participate in the 2 km family track, which is suitable for all ages, while the advanced 14 km track saw the participation of experienced cyclists. Many entertainment activities were held on the sidelines of the tour and lasted until 9:00 pm, such as events organised by Dubai Media Inc, sports activities by PowerFit Gym, an exhibition of classic and super cars owned by the Dubai Police, and more. The event concluded with a ceremony honoring the partners and supporters from the government and private sectors for their role in the success of this initiative, in line with HBMSU’s vision to establish solid, fruitful, and sustainable partnerships through which it can serve society.

The ‘Tomorrow Tour’ event, saw the participation of around 400 cycling enthusiasts, including 8 cycling teams, in an atmosphere of fun and excitement.  Partners and sponsors of the initiative were recognised for their commitment to the success of the event at the end of the tour. The initiative comes as part of a wide range of sporting and fitness activities hosted in the Emirate during the Dubai Fitness Challenge, which will last for 30 days from October 29 to November 27, 2022.