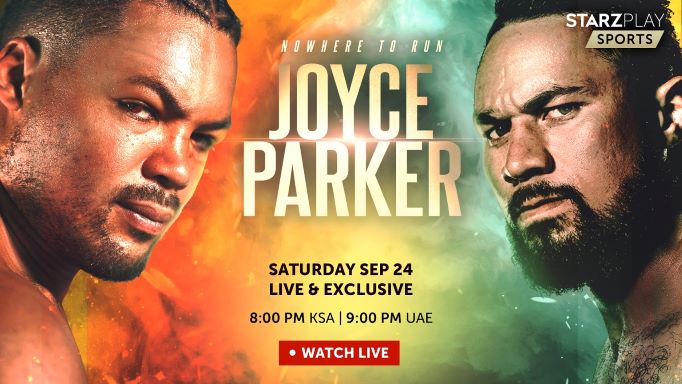 Fight fans in the region, get set be treated to an absolute firecracker of a fight this weekend between two men who rarely take a backward step. On Saturday Night, STARZPLAY Sports will be streaming the highly anticipated fight between two of the toughest men in the heavyweight division, Joe Joyce v Joseph Parker.

The pair will fight for the WBO interim heavyweight title with the winner moving into a mandatory position for a world title shot next with current WBA, IBF and WBO champion Oleksandr Usyk.

30-year-old New Zealander Parker is the underdog, despite being a former world champion and said in Thursday’s press conference that he is confident of a quick victory against the Briton, 37.

Parker, who trains with WBC champion Tyson Fury, lost his WBO world title to Anthony Joshua in their unification fight in 2018. The Kiwi lost his next bout to another British fighter, Dillian Whyte, but then went on a six-fight winning streak.

‘Juggernaut’ Joyce has yet to taste defeat in his professional career with 13 knockouts in 14 fights and has dispatched Christian Hammer, Carlos Takam and Daniel Dubois along the way. But his opponent has fought twice as many times and has a 70 percent KO rate, while he has never been knocked out.

With the interim WBO Heavyweight title and a potential world title shot on the line, this clash has the potential to spark some fireworks in the ring and STAZPLAY Sports will be there bringing you of all the action from Manchester England, live and exclusive.

Coverage starts at 8pm KSA/9pm UAE with a stacked undercard of 6 great fights, post which Joyce and Parker ring walks are expected to start around 12:30am KSA/01.30am UAE

When and where to watch?

Where to watch live: https://starzplay.com/sports

With thousands of hours of premium content including the best western content, Arabic shows, Turkish favourites, anime, and live sports, STARZPLAY is today one of the leading streaming platforms in the MENA region. The service is available in 19 countries across the Middle East, North Africa and Pakistan for fans to enjoy quality content anytime, anywhere, and from any device.

Launch of Bentley Mini Documentary Films Produced by BBC Storyworks, Part of Beneath the Surface Series

Original shows, exclusive content and an excess of movies coming this February, only on STARZPLAY