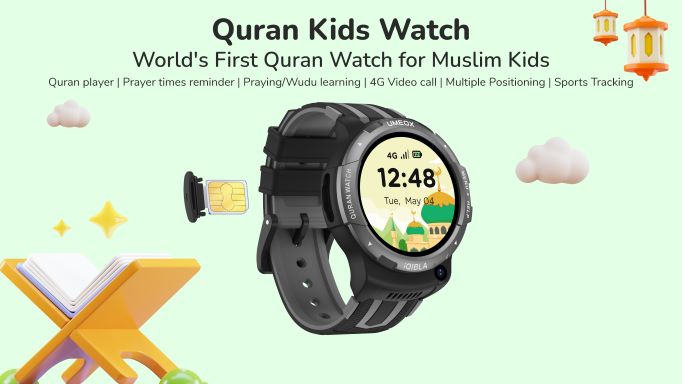 The smart watch works as a mobile phone for children so that a SIM card can be placed to make video and voice calls. Moreover, KO1 provides safety for children and reassurance for parents through notifying kids location that can be monitored and tracked through the iQIBLA KID APP via parents’ phone. Also, parents can define safe zones around the house or around the school, so the watch sends notifications as soon as the child exits the safe zones.

K01 enables children to send out an SOS signal with a thirty-second recording that is received by all family members using iQIBLA KID APP.

What makes the newly launched smart watch for children distinct is the presence of special features for Muslim kids, including the Holy Quran player with children repeating, so that users can learn the Holy Quran in a simple, modern and smart way.

In addition, the watch will remind kids of the five prayer times as well as it provides education on how to perform prayers. The Five Pillars of Islam and the Six Pillars of Iman (Faith) have been added to K01 as well.

Another unique feature added to the watch is setting different challenges for all family members including listening to the Holy Quran for certain periods. Points are then added based on the user’s achievements and all members are ranked according to the points collected.

Due to the fact that the watch is for school-age kids, by using the iQIBLA KID APP, users can set certain periods that their kids cannot use the watch to focus more on their studies. All call and message alerts will be silent upon activation and only the SOS signal function can be used.

Many gadgets developed by iQIBLA are pipelined to launched soon in the market.