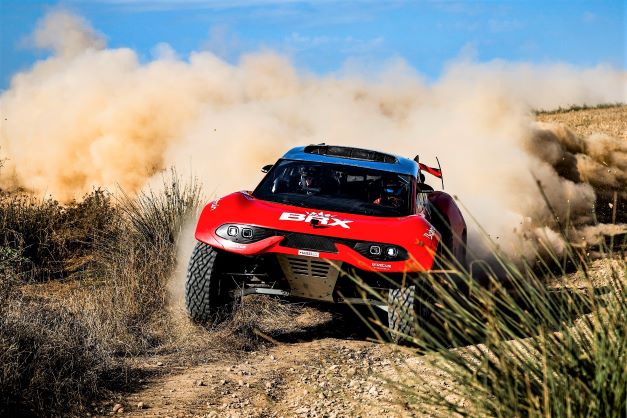 Sebastien Loeb won the opening round for Bahrain Raid Xtreme (BRX) in the battle to decide the inaugural World Rally-Raid Championship by setting the fastest time on today’s prologue stage in the Andalucia Rally.

Partnered by co-driver Fabian Lurquin in the BRX Prodrive Hunter, Loeb was five seconds faster than championship leader Nasser Al Attiyah in a Toyota Hilux on the qualifying stage as the five-day event began in southern Spain.

Saudi Arabia’s Yazeed Al Rajhi in another Toyota Hilux set the third quickest time on the stage, just ahead of Guerlain Chicherit, winner of the penultimate round in Morocco earlier this month alongside fellow-Frenchman Alex Winocq in their Prodrive Hunter.

A steering issue in Morocco cost Loeb his championship advantage, but the nine-time World Rally Champion plans a fight to the finish on Sunday to try and rub out Al Attiyah’s 22-point advantage.

He made the most of favourable terrain in Andalucia today to send out a warning that BRX are far from out of the running for both the drivers’ and manufacturers’ titles.

The qualifying stage which launched the final battle to decide the 2022 World Rally-Raid Championship was a 9.6 km test around the Grand Dos Hermanas Racecourse, where the Andalucía Rally is based for the week.

The short prologue stage was important because the top ten drivers earned the right to pick their crucial starting position in tomorrow’s first of four long selective sections.

After rounding off the recent Rallye Du Maroc with a superb stage victory, Loeb returned to action in southern Spain today looking to challenge the championship lead held by Al Attiyah.

The championship could ultimately be decided by stage wins in Andalucia, as they carry extra bonus points, in addition to the points secured by overall finishing positions on Sunday.

The Andalucia Rally serves as another reminder that the Prodrive Hunter driven by Loeb and Chicherit, has led to the development of an all-terrain hypercar version, which will be unveiled for prospective buyers in Dubai next month.

Loeb’s input from the BRX rally programme has been a key factor in the design of the hypercar, which is being built in limited numbers to the individual specifications of select super car enthusiasts.

Sebastien Loeb said: “It was a stage where we could do the recce and it was a bit like WRC style, so I could really push with the car from the start to the end. But it’s just the start, and the long stages follow.”

Guerlain Chicherit; “It was quite difficult for me because the car has a different set up for this type of rally and I just need to get used to it. In some places the stage was really tricky and I didn’t want to take any risks. I was really conservative, but everything is ok.”