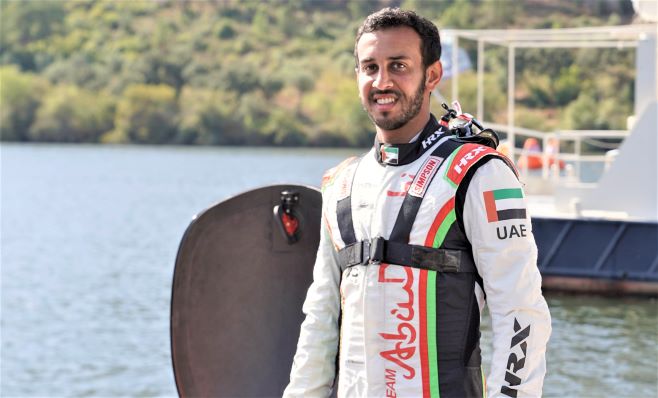 Al Mansoori’s brave bid to succeed team-mate Rashed Al Qemzi as world champion had seen him carry the lead into the final round of the series in Vila Velha de Ródão.

But a seventh place start today proved just too much for the Emirati, who eventually finished sixth as Norway’s Tobias Munthe-Kaas won by + 2.824 secs from Lithuania’s Edgaras Riabko.

Third place on the day was enough to give Hagin the F2 world crown as he held off Sharjah Team’s Sami Seliö in fourth to edge out the Finn by two points. Al Mansoori finished another point away in the bronze medal position.

The three-stage qualifying session on Saturday had set the stage for a fascinating fight to the finish to decide the championship.

After Al Mansoori missed out on the six-boat shoot-out by one place, home favourite Duarte Benavente went on to take pole position from Munthe-Kaas and Selio, with Hagin qualifying in fourth spot.

With Al Mansoori entering the final round holding a three-point lead from Selio, and Hagin another point away, a number of results were possible in the title race, including a tie at the top of the standings, to be decided by a countback.

To give himself the best chance of following Al Qemzi to the F2 title, Al Mansoori needed a flying start on the Tagus river circuit.

It was not to be on this occasion, and the Emirati slipped two places to ninth on the first lap, quickly recovering one of those positions on the next.

With Benavente making an early exit through technical problems and Swede Bimba Sjöholm flipping her boat on the 21st lap while lying third, Al Mansoori was up to sixth.

But following the re-start brought about by Sjöholm’s departure, there were no more changes to the top six as Hagin came through to snatch the F2 glory after 45 laps.

Al Qemzi’s hopes of a second successive win in Vila Velha de Ródão had been ruined when electrical problems brought him to an early halt in qualifying, forcing him to start the Grand Prix at the back of the 17-boat field.

He showed his fighting qualities again today, however, climbing through the field to finish tenth.