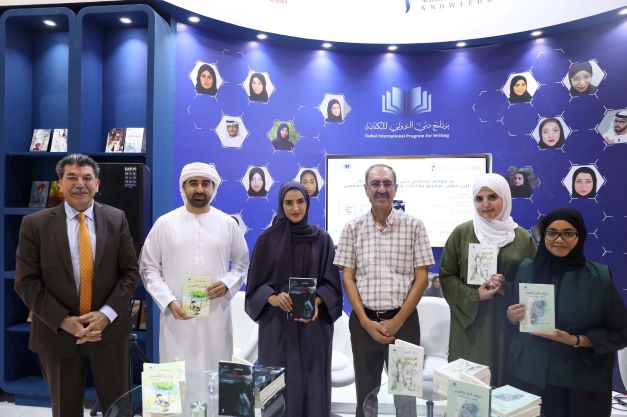 10 November 2022- The Mohammed bin Rashid Al Maktoum Knowledge Foundation (MBRF) organized several panel discussions and knowledge workshops at the 41st edition of Sharjah International Book Fair 2022, which is being held from November 2 to 13, 2022, at Expo Centre Sharjah, under the theme ‘Spread the Word’.

During its participation, MBRF organized a session under the theme, ‘The route to the world of knowledge’ as part of its ‘Digital Knowledge Hub’, which was attended by Dr. Khaled Abdul Fattah Mohamed, a counsellor of digital and knowledge solutions in MBRF. In addition, the Foundation also held several other sessions including ‘Readings from new publications’ for the authors of Knowledge Lounge, and ‘A tale will possibly knock!’ which saw the participation of the authors Brewin Habib and Hoda Harkous. As part of the Knowledge Lounge initiatives, MBRF hosted another session titled ‘Writing as moving testimonies’, which was attended by the novelist Waciny Laredj and Brewin Habib.

As part of the Dubai International Program for Writing, a ceremony for short story books was organized by the MBRF during its participation, along with a signing ceremony for the novels of Science Fiction workshop. In addition, the Dubai International Program for Writing’s instructors were honoured at a ceremony held by MBRF to commemorate the program’s tenth anniversary. His Excellency Jamal bin Huwaireb, CEO of MBRF, honoured the trainers Ri Abdula’al, Najwa Barakat, Islam Abu Shkeir, and Sameh Abdulla at the MBRF platform in the Sharjah International Book Fair.

Bin Huwaireb underlined the significance of MBRF’s participation in various knowledge fairs and cultural forums across the globe, most notably the Sharjah International Book Fair. H.E. reaffirmed the UAE’s commitment to strengthening knowledge partnerships with nations around the world, by establishing the pillars of strong relations and promoting the exchange of expertise and knowledge across all fields. This comes as part of MBRF’s long-term strategic vision of fostering knowledge and intellectual development as well as creativity.

Additionally, Bin Huwaireb highlighted MBRF’s continued efforts in reinforcing Dubai’s position as a global hub for creativity. As part of this, the Foundation has implemented numerous initiatives and projects that provide as well as foster an ideal setting for creatives across all the domains, which further assist them to excel and achieve success and excellence. This is in line with the Foundation’s commitment towards achieving Dubai’s vision, which includes establishing solid foundations that will foster all forms of intellectual creation. Bin Huwaireb also mentioned the MBRF’s initiatives to nurture creative talents and provide access to knowledge for all categories.

In addition, His Excellency further lauded the Dubai International Program for Writing, praising the portfolio of achievements it has gained since its inception. Over 182 publications were produced, and 20 workshops were conducted as part of this program. He added that the program comprises several knowledge projects and creative contributions intended to further the knowledge movement locally, regionally, and globally. As of now, more than 300 young individuals have received training in the craft of writing as part of these projects, which also focuse on inspiring and assisting young talents and creative minds in the field of writing.

MBRF organized another session on the science fiction workshop, which was attended by Ihssan Mohammed AlJinahi, one of the program’s applicants. Ihssan highlighted that these workshops gave suggestions for the Dubai International Program for Writing, to improve its work and avoid errors and mistakes. Another candidate, Nouf Al Mazmi, observed that the program gave participants the requisite skills to use their imagination in crafting sentences that would eventually become a novel. Al Anoud Suleiman, on the other hand, asserted that this course served as an enhancement to the skills and techniques of writing a novel, particularly a science fiction novel.

Numerous sessions were held as part of the Knowledge Lounge and the Dubai International Program for Writing, on the sixth day of MBRF’s participation in the book fair. These sessions included ‘A tale everyday’, in collaboration with the Dubai International Program for Writing and Qindeel for Printing, Publishing, and Distribution. The writing workshop ‘The UAE Tomorrow’ with the instructor Ri Abdula’al and the entrepreneurship workshop with the instructor Lana Qattan are two other workshops held during the event. Ri Abdula’al stated that encouragement and optimistic thinking expedite the writer’s progress. In order to prevent typical language errors in Arabic, she added that references should be used when employing synonyms because of the differences in their connotations. She also emphasized the need to use imagination while crafting engaging stories. The poet, Al Hanouf Mohammed, one of program’s applicants in the category of writers’ exchange, joined the MBRF platform for the session ‘Days in the land of rising sun’. Al Hanouf talked about the significant impact of the Dubai International Program for Writing on her writing skills. In addition to the session on ‘Writing as moving testimonies’, which was attended by the novelists Waciny Laredj and Brewin Habib, another applicant, the storyteller Mohsen Sleiman, also participated, through which he gave a glimpse into Japanese theatre.

Lithuania Food Innovations: A Ticket to UAE and Global Market