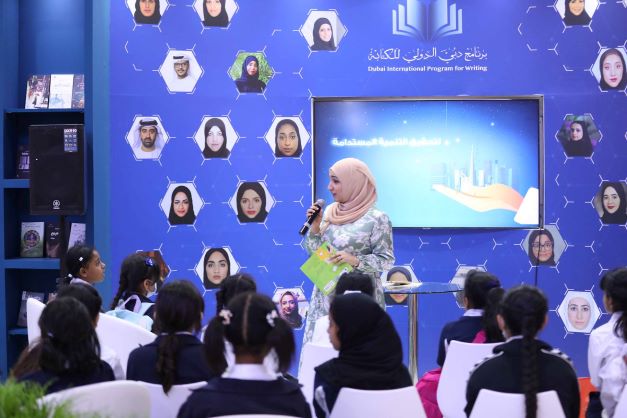 14 November 2022 – The Mohammed bin Rashid Al Maktoum Knowledge Foundation (MBRF) hosted several knowledge sessions and activities on the ninth and tenth days of the Sharjah International Book Fair, a major global knowledge event. The book fair was organized by the Sharjah Book Authority under the theme ‘Spread the Word’, from November 2 to 13, 2022, at the Expo Centre Sharjah.

During the ninth day of the international book fair, MBRF hosted a session under the theme ‘A story every day’, as part of its Knowledge Lounge projects. The main highlights of the session includes one of the members of the Knowledge Lounge program, narrating a story produced by the Dubai International Program for Writing to the children. This was done in an effort to foster the habit of reading among children, as well as encourage their passion in the art of storytelling. In addition, the Foundation also organized a book signing ceremony as part of the Dubai International Writing Program, for the book Al Noqat Al Baydaa by the author Amal Al Shamesi, and two stories by the author Najwa Al Awan, in the Short Story program.

A session titled ‘Writing Beyond Borders’ with the novelist and storyteller Taleb Alrefai was organized as part of the Knowledge Lounge activities. During the session, Al Rifaei highlighted the significance of the Dubai International Program for Writing as a major initiative in the Arab World to raise the literary standards of society, with over 300 participants from different corners of the world. He emphasized that penning short stories is one of the most challenging, yet interesting genres of writing amongst others, sharing that he is most captivated by its writing as well as the reading elements. Furthermore, he stated that crafting literary works in the Arab world demands a great deal of professional, personal, as well as emotional sacrifices, adding that while novels outnumber short stories globally, they are still very popular in America and Europe.

HE Jamal bin Huwaireb, CEO of MBRF explained that the key pillars of the Foundation’s activities at the Sharjah International Book Fair were writing, reading, and translation. He underlined the significance of writing as a means to share varied human experiences with the readers, highlighting the influential role that reading plays in expanding one’s knowledge, as well as shaping the character of an individual. HE further commended the talents of specialised translators in transcending language barriers and providing readers access to various exceptional international literature, as well as scientific knowledge works.

The Knowledge Lounge activities further included a session titled ‘Translation of Medium Languages and the Future of Arabic Translation’, which was hosted by Hussein Darwish, and involved the participation of Khalid Al Budoor. During the session, Al Budoor emphasized how universities help in enhancing the skills of specialised translators in deciphering literature from other languages, in addition to the contributions made by specialized Arabists in translating literature in China, India, and Japan. He further noted that modern technologies and communication platforms have aided in the process of cultural exchange.

During the tenth day of the Sharjah International Book Fair, the Foundation hosted two further Knowledge Lounge sessions. The first session was themed ‘Circle of Spices… the Intertextuality of History and Places’, where the author Saliha Obaid was interviewed by Dr. Mariam Al Hashemi. Al Hashemi elaborated on intertextuality, explaining that it is a concept that defines the connection between texts and pointed out that it has two kinds – poetic and historical. She asserted that we are impacted by the things we read, watch, and hear. Human behavior is an outward manifestation of our inner selves and is influenced by our ideas and emotions. Obaid continued by saying that she used to perceive history as a collection of parallel lines that occasionally cross and added that she relies heavily on short stories as well as tends to resort to different time dimensions as a way to adapt. She said: “When I have a new concept, I don’t write it down immediately; instead, I read because it gives me the answers to all of my questions and broadens my perspective.” The second session, titled ‘Podcasts and Knowledge Transfer’, was moderated by media star Alia Al Mansouri and featured speakers like Daja bin Farah and Safiya Al Shehi. Bin Farah defined a podcast as a digital audio recording platform that is available to everyone and can be separated into segments. She went on to say that podcasts make our life easier by allowing us to express ourselves and influence others through audio. She emphasized that the difficulty we now confront is in conveying a concept in just one minute or less. She claimed that women’s audience is more interested in health, fitness, and mental health podcasts, while men are drawn to sports podcasts.

Bin Farah further stated that the audio content produced in Arab and international countries must be monitored to guarantee that no values or cultures pertinent to a particular nation are harmed, and we have a huge responsibility to set up a monitoring system over the themes presented. She went on to say that since listeners are the biggest critics, content producers need to uphold the necessary standards by producing thoughtful content. Additionally, she stated that since information is always disseminated in the same way, whether it be through radio, television, or newspapers, journalists must stay current with new developments. Podcasts are a part of the aural culture, she added.

Furthermore, Bin Farah explained that podcasts originally had only audio, but as content producers began to consider the follower counts and percentage, video was eventually introduced. She continued by saying that by delivering instructional and narrative subjects as well as original and inspiring information that is relevant to them, we can encourage the younger generation to listen to podcasts.

Philip Morris Management Services (Middle East) Limited. Announces the Launch of New IQOS ILUMA in the UAE to Accelerate the Achievement of a Smoke-Free Future