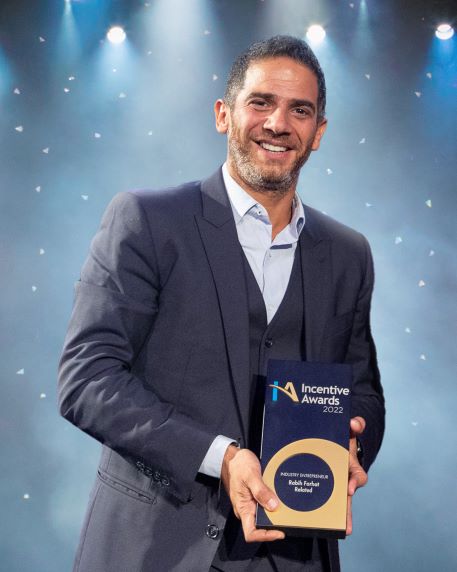 Dubai, United Arab Emirates – 20th October, 2022: RELATED has fortified its leadership in the rewards and loyalty sector, by receiving a recognition at the global “Incentive Awards 2022” ceremony, for its reward and loyalty program that was designed and developed for Kuwait Finance House “KFH”, a pioneer in Islamic Banking. The “Baitak Rewards” program won the “Best Use of Payments in a Programme” award during the ceremony recently held in London, and attended by a group of business leaders, experts, and elites from around the world, during which 18 awards were presented to various companies and individuals.

The “Baitak Rewards” program was awarded on part of its uniqueness; it took on the form of a digital currency used for a rich and wide variety of rewards from direct payments at merchants POS, deals e-vouchers, travel catalogue, exchange with other programs, donation, and cashback.

The “Incentive Awards 2022” also recognized Rabih Farhat, Founder and Managing Partner of RELATED for the “Industry Entrepreneur” award, for his continuous efforts and passion in highlighting the culture of entrepreneurship and bringing up the importance of loyalty and rewards concept to advance the economy and helping clients in the public and private sectors realise their potential in loyalty and rewards sector.

Commenting on the company’s achievements at the Incentive Awards 2022, Rabih Farhat explained that      these two awards are proof of the progress made by the loyalty and rewards industry in the GCC and MENA region, and places it at the top of the pyramid of the digital solutions sector for loyalty and rewards worldwide.

THIS HALLOWEEN, ENTER THE REALM OF DREAM AT SKY2.0