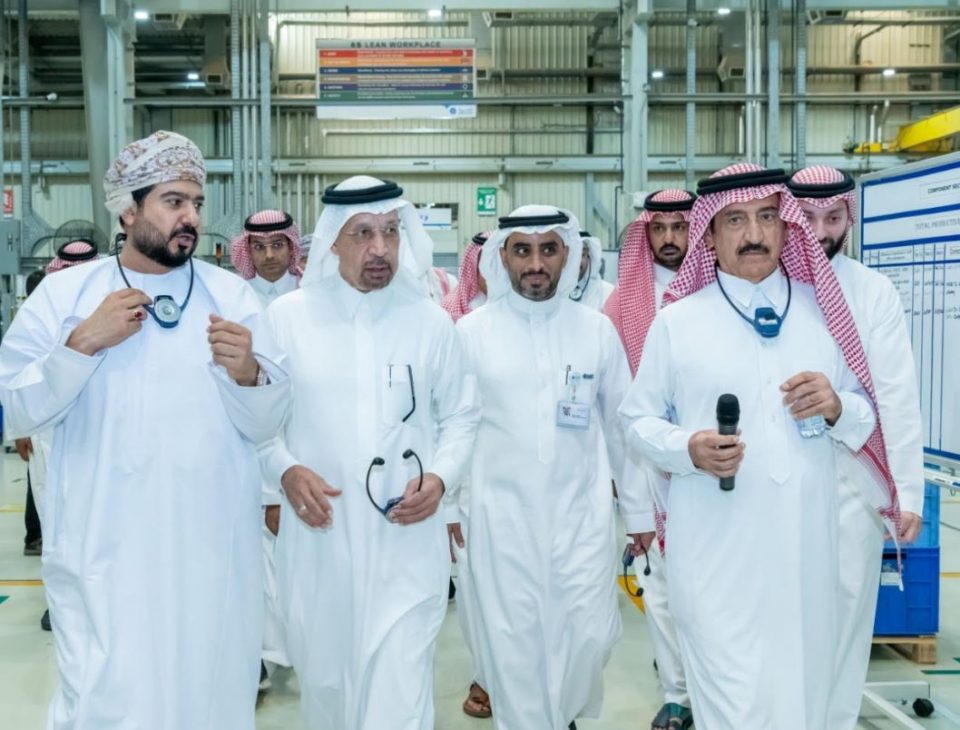 (Riyadh and Dubai): The Saudi Minister of Investment Eng. Khalid bin Abdulaziz AlFalih and his Omani counterpart His Excellency Qais bin Muhammad AlYousef, Minister of Commerce, Industry, and Investment Promotion, visited Alfanar Industrial City in Riyadh, which is one of the largest private industrial cities in the Middle East with an area of 720,000 square meters.
Chairman Alfanar Eng. Abdul Salam Al-Mutlaq, along with Eng. Amer AlAjmi, Executive Vice President of AlFanar, welcomed the ministers and briefed about the facility and its projects in and outside Saudi Arabia.
Eng. Amer AlAjmi, Executive Vice President of Alfanar Development presented the clean energy projects around the world, full range of services and products and Alfanar investment portfolio. He brief the dignitaries about Alfanar’s capabilities in various sectors and projects, especially renewable energy projects. The presentation followed a discussion about Alfanar’s initiatives in Saudi Arabia and rest of the world. The visit included a tour of a number of production lines and factories in Alfanar Industrial City.
Alfanar and Saudi Women Empowerment
During the tour, the women’s section, which began in 2003 with four women, and currently includes more than 700 Saudi women, working in many departments of factories and production lines, was visited, as the number of female workers increased in these departments in recent years in pursuit of Alfanar to empower women in the manufacturing sector.
At the end of the tour, ministers expressed their admiration for the distinguished industrial and administrative level they witnessed during their tour of Alfanar Industrial City.
Eng. Abdulsalam AlMutlaq, Chairman of Alfanar, said: “This visit at the level of ministers from Saudi Arabia and Oman, and in the presence of officials from both parties, comes from their belief in the role of the private sector as a successful partner in localizing the industry and promoting local content in line with the Kingdom’s vision 2030.”
He said: “Alfanar Company has a distinguished experience and accumulated experience gained over the years in the localization of the energy industry, as it had a leading role in the infrastructure work, as well as transferring the techniques of manufacturing electrical and construction products to the Kingdom, in order to invest in the development of clean energy projects around the world.”
Alfanar is one of the first national companies that invested in the future of sustainable energy in the Kingdom of Saudi Arabia, believing in the importance of keeping pace with the global transformation to the clean and renewable energy sector, which is considered a strategic axis to raise its contribution to electricity production and reduce harmful carbon emissions resulting from traditional energy resources.
The company has several renewable energy projects around the world with a capacity of up to 1.8 GW.