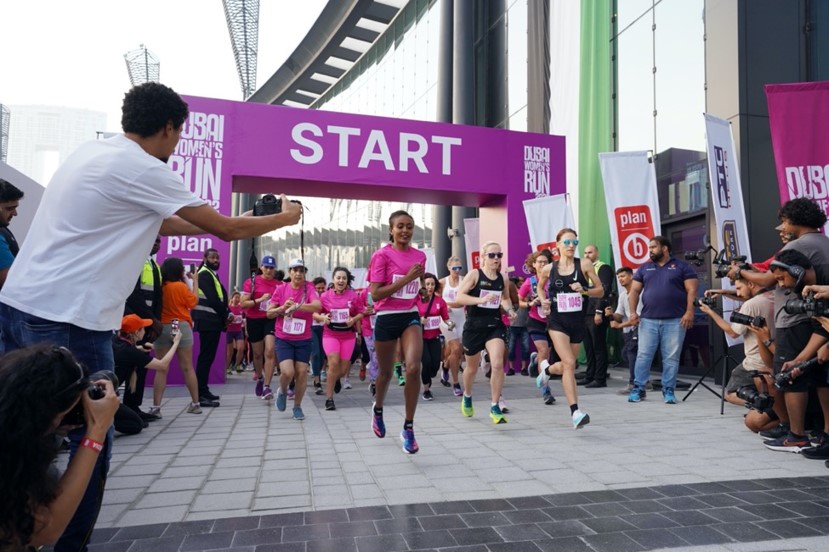 Over 3,000 women ran through the frame worthy Bluewaters enjoying perfect conditions for their 3km fun run and 5km and 10km marathons during this year’s edition of the Dubai Women’s Run.

Celebrating the 9th edition of the amazing run, organized by Plan b Group in association with the Dubai Sports Council and UAE Athletic Federation, women from over 80 nationalities [J1] participated in their respective runs as they posed under the finish line’s gantry, commemorating their determination to complete the course. Emirati, Arab, Filipino, South Asian, African and women from many other parts of the world and walks of life flocked to the mega-event.

Additionally, International mega-star Sanjay Dutt shared warm words of encouragement and support for the women running which amplified the already energetic aura in the air.Surinder Kaur, hailing from India was the oldest participant at an astonishing 73 years-old, but age did not deter her from completing the 5km marathon. Contrastingly, Kavya Aiyar, aged 5, enjoyed completing the 3km fun run as the youngest participant for Dubai Women’s Run 2022.

The event that honors the zeal and zest of women in the region and globally was a platform to many engaging initiatives. One such initiative was the ‘Beyond Blue’ campaign supported by the School Transport Services, which enabled hundreds of women from labour-intensive occupational backgrounds to participate in this year’s run for free. Another heartwarming initiative was the transformation program which saw a non-runner train over a course of eight weeks to become fit and complete the run.

This year’s run had it all; from nail-biting races, jamming music, live paintings, stilt men, on-stage dances and celebrity role calls! Cultural performances highlighting the diverse backgrounds the ladies represented had the crowd cheering in addition to the inspiring words from the previous edition’s ‘Women of Substance’.

Dr. Harmeek Singh, Founder of Plan b Group and Chairman of Dubai Women’s Run said, “This year saw thousands of women from 80 nationalities came together for the 9th edition of Dubai Women’s Run which has become a staple fixture of the UAE’s athletic calendar. The turnout, energy, performances and overall atmosphere was exhilarating and we cannot wait to do this again next year. The event has garnered the attention of international celebrities like Sania Mirza, Sanjay Dutt and Miss Uganda whilst also inspiring local talent and giving them a platform to put on performances on a big stage in front of an energetic crowd. Dubai Women’s. Run has brought about a new era of support inculcating values of unity within community & growing together come what may. We look forward to seeing an even bigger turnout at the starting line next year.”

“We were delighted to play a part at this year’s Dubai Women’s Run, it was incredible to witness women from all walks of life and communities come together for one goal – women empowerment”, said Fawzia Faridoon, Head of Women Sports Development at Dubai Sports Council.

“The atmosphere was nothing short of spectacular! We saw women from all over the world unite here in Dubai to have fun and celebrate their hard work that they put in throughout the year. From the performances to the races, everything was dedicated to making these women smile. Successfully, we’ve achieved this and cannot wait to partner with Dubai Women’s Run again next year”, mentioned Major General Dr. Mohammad Ahmed Al Murr, President of UAE Athletics Federation.