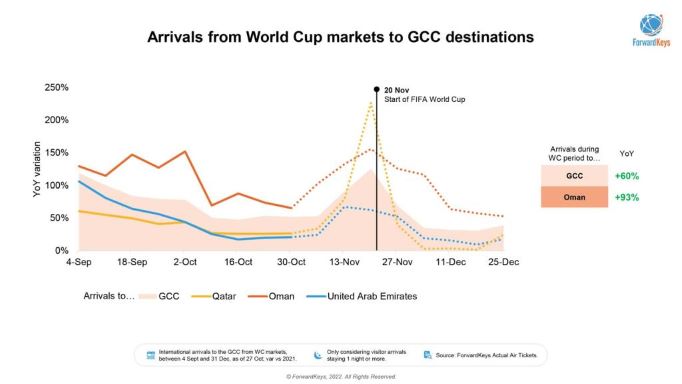 Muscat, Oman, November 2022: ForwardKeys, a leading travel data and analytics organisation, released its latest data on airline ticket reservations, for November and December 2022. The report stated that the Sultanate of Oman recorded a significant increase in performance compared to other tourist destinations in the region. According to the report, Oman can expect an increase of more than 93 per cent international arrivals from European countries, as well as an increase of more than 156 per cent from the regional markets.

Haitham bin Mohammed Al Ghassani, Director General of Tourism Promotion at the Ministry of Heritage and Tourism said: “The latest data shared by ForwardKeys shows the importance of facilities, including air transport, to attract travellers. The Sultanate of Oman plays an important role in contributing to the growth of tourism in the region, given its well-established roots identifying culture, tradition and heritage that blend with modern experiences. Oman is flooded with natural beauty and is a haven for visitors, making it an ideal place for a couple or a family.”

“During the World Cup period, Oman will benefit from travellers visiting multiple destinations within the GCC. This is an exciting opportunity for the destination to engage with highly motivated travellers who are keen to travel in the post-pandemic and explore the region more,” says Olivier Ponti, VP of Insights at ForwardKeys.

ForwardKeys was founded in 2010 on the premise that businesses dependent on international travellers – such as tourism organisations, hotels, and retailers – would make better strategic decisions if they knew who was travelling where, when and for how long. The range of travel data solutions and insights are frequently used by industry partners such as UNWTO, WTTC and MEADFA. Learn more by visiting their website: www.forwardkeys.com

Tax filing errors to avoid while filing taxes to the IRS

WORLD CHEESE AWARDS 2022: PARMIGIANO REGGIANO IS THE WORLD’S MOST AWARDED CHEESE THIS YEAR

Covid-19 rules in Dubai and Abu Dhabi this weekend: what you need to know