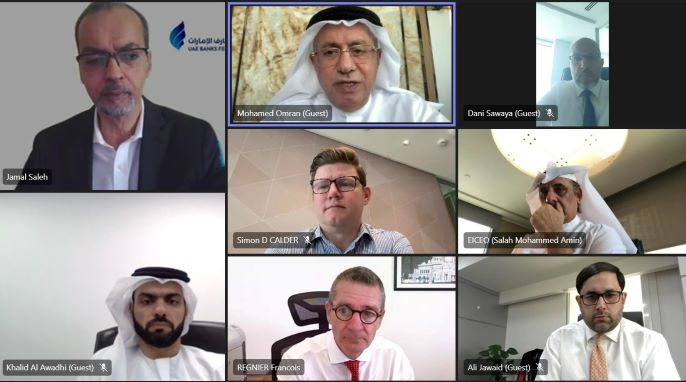 The meeting discussed the Council’s strategy and plans to deepen its participation in decision-making to support UAE Banks Federation’s role in the development of the UAE banking and financial sector. Participants at the meeting also deliberated on the cooperation with various committees under the federation to advance their work, and efforts being made to ensure the highest level of governance and transparency in the sector.

The Consultative Council, which was established following the decisions of the UAE Banks Federation’s General Assembly and the Board of Directors meetings in December 2021 and April 2022, evaluated the strategies and plans for Emiratisation in the banking and finance sector in the country, as well as the programmes being implemented by the federation to enhance the skills and qualifications of Emirati youth to enable them to take on leadership roles in the industry.

The CEOs present at the meeting discussed the plan and topics of the training and technical sessions that the UAE Banks Federation plans to organise in the coming period to keep pace with the rapid developments in the banking and financial sector to ensure the adoption of the best banking practices.

Furthermore, the meeting also discussed the National Fraud Awareness Campaign, which is in its third consecutive year and has been successful in raising public awareness of the dangers of fraud over the past two years, especially given the increasing reliance on e-commerce, banking and digital transactions. In addition, the meeting discussed the Cyber Wargame initiative, which is part of the Federation’s efforts to promote cybersecurity and best practices to increase the level of security and protection of digital infrastructure, as well as to enhance collaboration with the Ministry of Justice and the Cyber Security Council.

During the meeting, Mr. Jamal Saleh, Director General of UAE Banks Federation, shared an overview of the programmes and initiatives undertaken by the Federation this year, its plans for the last quarter of the year, and the initiatives that have been implemented in collaboration with various authorities in the country under the supervision of the Central Bank of the UAE. The UAE Banks Federation, through these initiatives, supports the progress of the banking and financial sector in the UAE in developing, implementing and adhering to the latest systems and policies, especially those related to compliance, governance and transparency.

His Excellency Mohammed Omran Al Shamsi,  Vice Chairman of UAE Banks Federation and Chairman of the Consultative Council, said, “The discussions at the Council’s second meeting reflect the commitment of the participating CEOs in supporting and strengthening the UAE Banks Federation’s role through the exchange of experiences and knowledge, as well as the Council’s enhanced cooperation and coordination with various committees under the federation.”

His Excellency added: “The Consultative Council, in collaboration with the Advisory Council and Board of UAE Banks Federation, and the continued guidance and cooperation of the Central Bank of the UAE, is working on initiatives to develop innovative solutions that meet the needs of customers and build an integrated system that safeguards the interests of the banking and financial sector in the UAE.”

The establishment of the CEOs Consultative Council came as a complement to the Advisory Council, enabling the CEOs from all member banks to express their views and benefit from their extensive experience, and deepen the basis for participation in decision-making. The Consultative Council is an important pillar of the Federation alongside the CEOs Advisory Council, which has represented the banking sector optimally since its inception ten years ago.

The two councils provide a consultative platform to discuss banking-related issues and make decisions that strengthen the UAE Banks Federation’s role in supporting the development of the banking sector in the UAE.

Half of UAE tech leaders expect IT budgets to increase: KPMG study