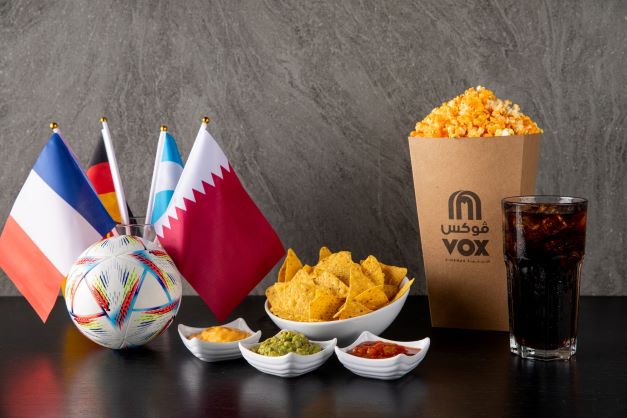 Dubai, United Arab Emirates, 22 November 2022: VOX Cinemas, the dedicated cinema arm of Majid Al Futtaim, is excited to announce the launch of an all-new F&B menu, as part of its unique offering to screen the much-anticipated tournament live in partnership with beIN SPORTS, the Official Broadcaster of the FIFA World Cup Qatar 2022™ in the Middle East and North Africa (MENA).

VOX Cinemas will be offering limited-time, football-inspired snacks from the Candy Bar starting from 20 November, when the greatest football event of the year kicks off. Football fans and food lovers can choose from à la carte items such as Loaded Chicken Pops, Halftime Pies, Football Fries, Brazilian Hotdogs and Stadium Hotdogs, level up with Stadium Trays, or go all out with Snack Combos which come with football merchandise such as country flags, vuvuzelas and whistles. In addition, THEATRE Café is running a special promo: any sandwich or pizza and soft drink, now for just AED 55.

Expect more premium packages to be announced throughout the World Cup season.

Fans cheering on their favourite teams can choose from a variety of experiences, including THEATRE and GOLD, mega-screen MAX cinemas, open-air OUTDOOR cinemas at Galleria Mall Jumeirah and Aloft Dubai Creek and even a private cinema at Kempinski Hotel, Mall of the Emirates.

Book the ultimate game-day experience for you and your squad with fully immersive screen and sound, guaranteed pitch-side seats and stadium-inspired tasty snacks. In addition to Standard tickets, football fans can also choose from three World Cup Passes, a Three-Match Pass, a Five-Match Pass or a Season Pass*, which includes unlimited access to matches*. For more information, visit voxcinemas.com or the VOX Cinemas app. For group or corporate reservations, email events@maf.co.ae.

How can you correct your taxes with an amended tax return?