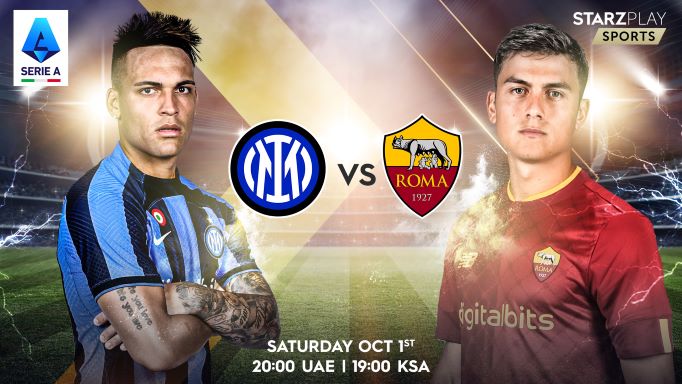 Serie A is back with a bang this weekend following the international break. Inter Milan will be hoping to carry on an unbeaten run against Roma on Saturday when the two sides meet in a Serie A clash at Stadio Giuseppe Meazza.

The stakes are high as both teams are separated by just one point after seven matches, Inter are seventh with four wins and three losses while Roma are sixth with four wins and a single draw in seven outings. Inter have however scored five more goals than Roma this season which should make this an interesting game.

Roma’s most productive player in attack has been Paulo Dybala, who has scored on three occasions. Inter have been led by Martínez, also with 3 goals so far this term. Both teams will be relying on their talisman to bring home the win

The only place to watch this huge clash is on STARZPLAY, who have exclusive rights to stream the premium Italian League (“Serie A”), “Coppa Italia” (Italian Cup), and “Supercoppa Italiana” (Italian Super Cup), for the next three seasons.

The match will be on the Abu Dhabi Sports 1 Premium channel exclusively streamed on STARZPLAY Sports. Subscribers of STARZPLAY Sports can access to the Italian League Serie A, enabling football fans across the region to watch every game each week live and exclusive with Arabic and English commentary.

When and where to watch?

Match: Inter Milan vs AS Roma

Where to watch live: https://starzplay.com/sports

With thousands of hours of premium content including the best western content, Arabic shows, Turkish favourites, anime, and live sports, STARZPLAY is today one of the leading streaming platforms in the MENA region. The service is available in 19 countries across the Middle East, North Africa and Pakistan for fans to enjoy quality content anytime, anywhere, and from any device.

From ‘Bell Bottom’ to ‘Raazi’: New and old Bollywood spy thrillers to get your heart racing