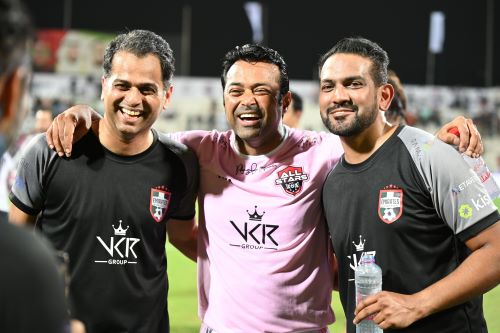 Wilson Varghese is an executive leader with over 19 years of financial services experience in insurance, consulting, banking, and strategic partnering.

Forbes Middle East named him one of the “Ones to Watch” in the financial sector in 2014. Little did we know that we would soon be adding him to our list of ‘Forces to watch out for’ on the football field.

Wilson’s strong sense of direction and unity played a huge role in sliding Emirates United to an easy 3-0 win over All-Stars Football Club (ASFC). When not showcasing his dribbling skills on the pitch alongside his teammates at Emirates United, Wilson leads a corporate team at Zurich Insurance Company Ltd as the general manager and head of operations.

MENews24/7 caught up with this ‘force’ to understand his experience and learn his tricks on the football field.

A once in lifetime experience that will be difficult to forget! The concept of this event itself was unique, the cause was noble and the execution – flawless. To meet with and interact with the stars on and off the pitch on both teams was surreal. I particularly also enjoyed meeting and interacting with interesting new teammates from across industries – media, entertainment, sports and business.

There was more than one thing, but to name a few – The camaraderie and goodwill that was on display on both sides before, during and after the game was wonderful to see. The All Stars may have lost the game but they won many hearts including Emirates United’s with their competitiveness, yet very good spirit with which they played and took in the results. Their guard of honour for us at the end was a surprise and a touch of class in my opinion!

Which ASFC celebrity was you most excited to see and interact with on and off the pitch?

That’s a really tough one, these were like the Bollywood Galacticos and naming one would not be fair. But since I’m on the spot, let me be probably a bit contrarian and genuinely say that I enjoyed meeting tennis champ Leander Paes. Having played tennis in my younger days, he really flew the Indian flag high in his playing days with multiple Grand Slam wins and represented the country with distinction at the Davis Cup and also an Olympic medal. I made sure I met him to thank him for the wonderful sporting memories both professional and now social!

We were a diverse mix of cultures, professions and personalities with one common love – football! It was amazing how we connected so quickly both on and off the field. Emirates United is an apt name for the team, our unity in diversity was reflective of the fabric of this wonderful country that we call the UAE. From RJ Kris Fade, to basketball legend Fadi El Khatib, Bakhit Saad, social media personalities Bin Baz and Hamood Bamby and of course our captain H.E Nasser Al Neyadi to name a few.

While I’m tempted to say every fortnight, I think this would be a well received event twice or thrice a year.

It takes a lot of coordination, skill and goodwill to be able to pull off an event that brings together a diverse set of personalities with demanding schedules so hats off for getting it done.

Kia to establish its first electric PBV plant in Korea, as it accelerates electrified mobility

How can businesses find a more meaningful role during Ramadan? By Instinctif Partners MENA