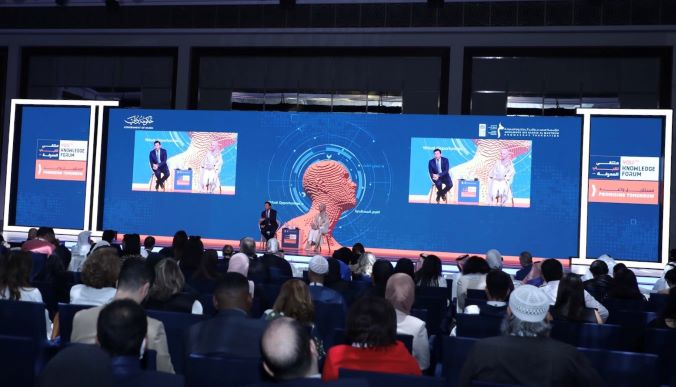 Salem Al Qubaisi underlined the need to implement comprehensive visions and plans in order to bring ambitious goals into reality. He added that the Mohammed Bin Rashid Space Centre’s founding 20 years prior sparked the idea for the Hope Probe and that it was constantly developed until the probe was launched and reached Mars. According to Al Qubaisi, the Hope Probe was made possible by the youth’s energies, and the project involves over 200 Emirati engineers with an average age of 27, meaning that the youth’s energies propelled the UAE to Mars.

On the other hand, Dr. Zhang highlighted that creation and dissemination of knowledge have helped to change people’s lives and that the ability to foresee diseases and epidemics can assist in reducing the risk and damage associated with them. He further stated that scientific understanding and technical advancements played a vital role in addressing the challenges and impacts of the COVID-19 pandemic and noted that we must make use of knowledge and the tools and strategies it offers to do so in mitigating future issues.

According to H.E., Arabic language and Arab identities of Arab countries are very close and similar, which is a benefit and a point of strength that unites Arab youngsters and highlights that all Arab countries are united by one intellectual identity. H.E. added that the Arab youth are a valuable resource that must be used to build the future and emphasized that managing the future begins in the present. H.E. further said that there are many differences between actions and reactions as well as between those who wait to see what the future holds and those who try to predict it.

H.E. further explained that in contrast to Europe, whose progress started at the beginning of the Renaissance, the Arab world was the first to establish numerous branches of research in the field of science. However, he noted that this had the unintended consequence of making Arab nations more lenient in their use of knowledge. He stated that despite this, a new phase of Arab revival has begun, one that mostly depends on the new generation.

Asma Al Balushi, a member of the Dubai Youth Council, moderated the discussion session titled “Youth Circles: In-person vs virtual education,” which featured a number of youth speakers. Education in the Metaverse, The Role of Governments in Education, Academic Accreditation for Virtual education, and Technology or No Technology in Education were some of the few of the topics covered in the sessions that focused on the knowledge ecosystem.

The participants discussed the differences between virtual and real education, clarifying that virtual education came as a continuation of real education and not a replacement for it. The COVID-19 pandemic accelerated this new reality in the educational ecosystem, which resulted in a positive impact on the continuity of the educational process during an unprecedented time when nations around the world were on complete lockdown.

The participants further stated that governments keep education as a top priority, as it serves as a tool for a nation’s development. And therefore, governments should efficiently manage their educational systems to keep pace with global changes, especially in light of rapid technological developments that have been prevalent in the educational ecosystem following the technological revolution. They further explained that while technology has improved the learning mechanisms for students and helped them overcome obstacles like time and distance, it has also prevented them from directly interacting with their classmates and teachers, which is a feature that is more readily available with real education. The participants also stressed the need for virtual education to support and continue traditional education.

The session focussed on the prevalent trends in digitalisation and the work environment and ecosystem. It stressed the significance of digital skills, and the transition towards a skill-based workforce, and further highlighted the importance of implementing remote working and its effects on productivity, mental health and welfare.

The participants discussed the Fourth Industrial Revolution and AI, their benefits for improving quality of life as well as their drawbacks, which include the loss of jobs as a result of automation, in addition to the emergence of new positions requiring a high level of education and training.

Furthermore, the participants emphasised that although robots will undoubtedly replace a number of jobs in the future, they are still limited to certain levels of performance and task execution, and we still need to consider human judgment as it is more important than artificial intelligence (AI) while decision-making, particularly when it comes to making crucial decisions like implementing laws.

Participants in the discussion covered a variety of subjects, but most important among them were the reasons behind the youth’s desire for change, the difficulties young leaders encountered while starting their projects, and the results of their efforts. The participants also discussed the crucial traits that people need to possess in order to succeed in leadership roles. They added that perseverance, passion, and patience are the three main traits required for success and that they must all be present in order for someone to achieve the best results and outcomes.

The participants also emphasised the importance of flexibility and the capacity to learn, adapt, and change in the job market, as it has become challenging for competing businesses to advance and succeed without doing so, particularly in light of the rapid technological advancements that the world is experiencing on all levels.

Additionally, the participants highlighted that one of the main challenges young leaders encounter is the capability to select a good team and make effective decisions, as well as the availability of the abilities and skills required for any project to advance and achieve continuity and success.

The Forum also featured a discussion with Emirati youth who won international awards to learn about challenges, overcoming them, and how they affect youth and society, with participants including Hamdan Al Amri, International Peace Prize awards from the Davis Foundation, USA; Fatima Al Balushi, honored as Regional Impact Coordinator (for Arab Youth) by the Youth Association in 2019 for an international, voluntary, non-governmental and non-profit organization; Khalid Al Shamsi, Graduate of the Young Leaders Program, UK, in 2020. The participants in the workshop discussed their experiences and journeys to achieve their goals, the difficulties they encountered and how they overcame them, and the impact they have had on young people and society.

The Youth Knowledge Forum serves as a platform to encourage the youth and motivate them to realise their knowledge ambitions and be inspired by the previous winners of the Mohammed bin Rashid Al Maktoum Knowledge Award, and their stories of success that have left a significant mark on the knowledge ecosystem regionally and globally.

Coronavirus: Indian expats returning to the UAE need another layer of approvals