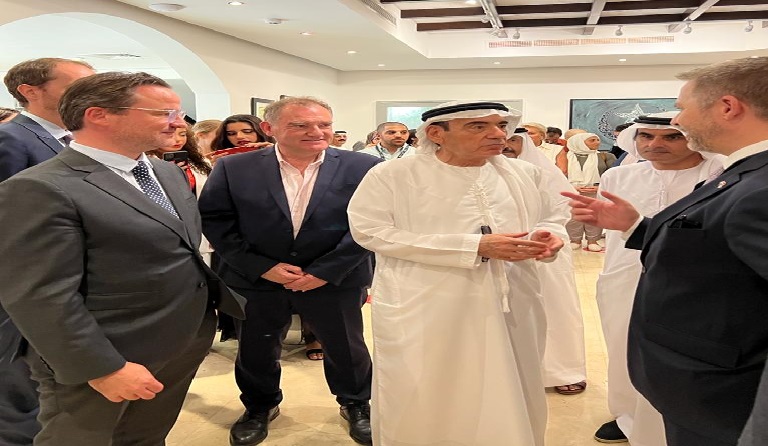 The event also witnessed the attendance of H.E. Antoine Delcourt, Ambassador of Belgium to the UAE, H.E. Robert Lauer, Ambassador of Luxembourg to the UAE and the French Embassy representative in Abu Dhabi, H.E. Sultan Al Hajji, President of Alliance Française-Abu Dhabi, Franck Trouilloud, director of the Alliance Française d’Abu Dhabi, Mr. Saeed Hamdan Al Tunaiji, Acting Executive Director of the ALC, and a crowd of businessmen, UAEU students and lovers of culture and art.

On this occasion, H.E. Zaki Nusseibeh said: “We are glad that this innovative exhibition, which has been conceived as a crossroad where the most profound forms of expression intersect in an innovative and intercultural spirit, highlighted the depth of intercultural relations between the Emirates and France. The Alliance Francaise Abu Dhabi, which has been established sine nearly half a century, proved his ability to strengthen these distinguished fraternal relations, and build bridges between the Middle East and Europe, which carry out the fruitful collaboration of Arab and Western cultures.”

“The artist, Ayman Bazerbashe, has excelled in highlighting the Arabic Islamic calligraphy through the concepts linking image with concept, and letters with ideas. The chosen quotes were belonged to many thinkers in the Middle East and even beyond, englobing logic and philanthropy, hope and despair, happiness, modesty and virtue, which constitute wise heritage expressions and phrases that contribute to the preservation of the Arabic language and work to engrave it in the hearts of future generations”, he added. 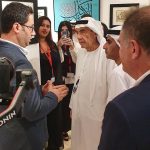 On his part, Franck Trouilloud, director of the Alliance Française d’Abu Dhabi said: “It all started when a few months ago, when I discover the creative work of Ayman Bazerbashe, a calligraphy artist residing in Dubai, inspired by a work based on a maxim written by Plato in the setting of an ancient dialogue: “Wisdom begins in wonder”, and that’s when the philosophical-calligraphic magic began. The result, breathtaking in its grace and beauty, is not only a transcription in Arabic or an illustration of a philosophical thought: it embodies it and, by mixing disciplines and languages that were previously discordant, creates a completely new artistic object, at the crossroads of genres and cultures. From this incredible success, other calligraphies are born, forming a total of thirty original executions that are considered as either a form of an intelligence in movement, or as a reflection of the passage of a thought to its word form.”

The “Feathers & Thoughts or The World’s Soul” exhibition will be held at Alliance Francaise Abu Dhabi starting 12th. of October 2022, up until the 31st. of January 2023. The exhibition is a philosophical and calligraphic cultural exhibition destinated for all ages, for art enthusiasts, language students, for curious individual as well as for those familiar with French Alliances of the world. An educational booklet as well as calligraphy workshops will accompany it.

Nitin Menon Interview: Playing with the celebs is a memory that I’ll cherish forever