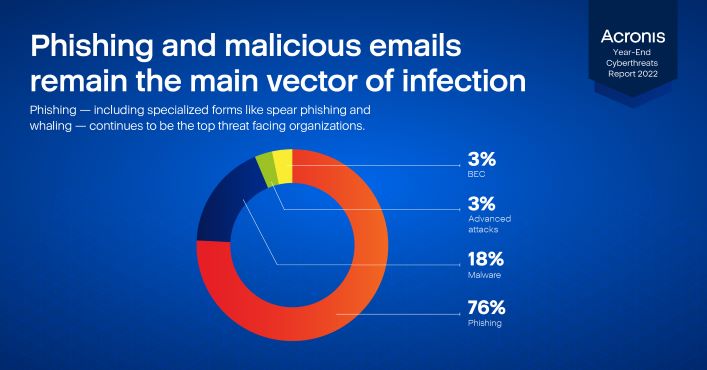 Between July and October, Acronis found that the proportion of phishing attacks has risen by 1.3x, accounting for 76% of all attacks – an 18% increase from a previous Acronis report released earlier this year

Dubai, United Arab Emirates, January 18, 2023 – Acronis, a global leader in cyber protection, released its latest cyberthreats and trends report for the second half of 2022 which found that phishing and the use of MFA fatigue attacks, an extremely effective method used in high-profile breaches, are on the rise. Conducted by Acronis’ Cyber Protection Operation Center, the report provides an in-depth analysis of the cyberthreat landscape including ransomware threats, phishing, malicious websites, software vulnerabilities and a security forecast for 2023.

Of note, the report found that threats from phishing and malicious emails have increased by 60% and the average data breach cost is expected to reach US$5 million by next year. The research team who authored the report also saw social engineering attacks jump in the last four months, accounting for 3% of all attacks. Leaked or stolen credentials, which allow attackers to easily execute cyberattacks and ransomware campaigns, were the cause of almost half of reported breaches in H1 2022.

“The last few months have proven to be as complex as ever – with new threats constantly emerging and malicious actors continuing to use the same proven playbook for big payouts,” said Candid Wüest, Acronis VP of Cyber Protection Research. “Organizations must prioritize all-encompassing solutions when looking to mitigate phishing and other hacking attempts in the new year. Attackers are evolving, using some of the tools, like MFA, that we rely on to protect our employees and businesses against us.”

As the Middle East region continues to grow its digital ecosystem, solid cybersecurity strategies remain a top priority on the back of heightened data breaches. According to security analysts, breaches reported in the Kingdom of Saudi Arabia, for example, could reach an average of US$7 million as the country continues to report one out of five attacks to be ransomware.

With the average cost of ransomware attacks increasing every year, factors such as weak credentials, phishing emails, and unpatched vulnerabilities remain the top cyber-attacking vectors. In the UAE, targeted organizations lost over US$1.4 million in ransomware, forcing over 40% of the impacted companies to shut down. Following this worrying trend, the UAE Cyber Security Council announced the adoption of stringent cybersecurity standards to safeguard the country’s digital space.

Ranked as the sixth-most dense region for cybercrime in the world, cybercrime victims in South Africa surged from 14.1 victims per one million internet users in 2019 to 50.8 victims in 2020. Most recently, the country enacted its cybersecurity act, which clearly defines cybercrimes in a bid to effectively regulate and prosecute them.

As security tactics and the technologies associated with them evolve, so do the threat actors trying to break into organizations and their ecosystems. The constant feed of ransomware, phishing and unpatched vulnerabilities demonstrates how crucial it is for businesses to reevaluate their security strategies.

Unpatched Vulnerabilities Prove Fruitful into the Second Half of the Year:

Founded in Singapore in 2003 and incorporated in Switzerland in 2008, Acronis now has more than 2,200 employees in 40 locations in 19 countries. Acronis Cyber Protect solution is available in 26 languages in over 150 countries and is used by over 20,000 service providers to protect over 750,000 businesses.