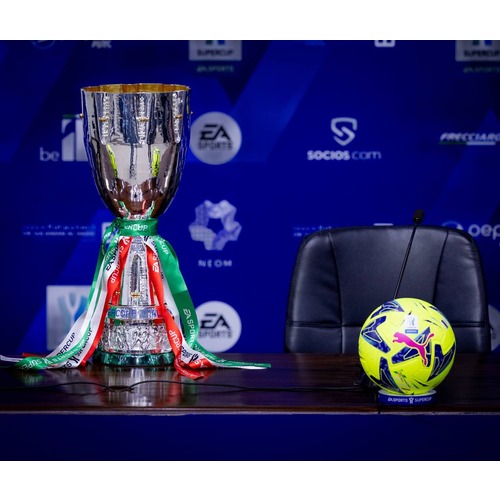 Riyadh, Saudi Arabia — A press conference was held ahead of the Italian Super Cup tomorrow, between AC Milan and Inter Milan, staged at King Fahd Stadium in Riyadh at 10:00pm (local time), brought by Saudi Ministry of Sport as part of the sporting events in Diriyah’s 2nd Season.

The press conference kicked-off by AC Milan coach Pioli and Calabria have spoken at a press conference to present this great fixture. Coach Pioli said: “It’s an important game with a trophy at stake. Games against Inter in recent seasons have always been difficult and intense. On the day before a Final, it’s neither easy nor difficult. They are a strong opponent who have always been difficult for us, even in the games we have won. We will have to put in the best performance possible.”

He added: “I am happy to be in the Kingdom for this event and looking forward with the team to have a good time here and enjoy the hospitality of Saudi Arabia.”

Coach Pioli addressed a question about the performance of Saudi national team for football and said: “We saw how the Saudi national team achieved a valuable victory over Argentina in the World Cup 2022 in Qatar, which received positive echoes across the globe, and thus reflected a distinctive image of football landscape in Saudi Arabia.”

Inter Milan head coach Simone Inzaghi expressed his happiness as well to be in Saudi Arabia for this event and said: “We are pleased to be here in Riyadh, and to see many fans who will wear Inter Milan shirts.”

Looking to tomorrow’s match, Inzaghi said that “We know the importance of this match, and what’s more, it’s a derby in the final. We will try to play a great match,” the coach continued, “it’s the first trophy on offer this season and we want to do well.” Asked what he would see as the significance of winning tomorrow, Inzaghi said that “I consider it a trophy, not all teams are able to get to this point.”

Parfums d‘Elmar: an enigmatic experience of elegance and pure luxury