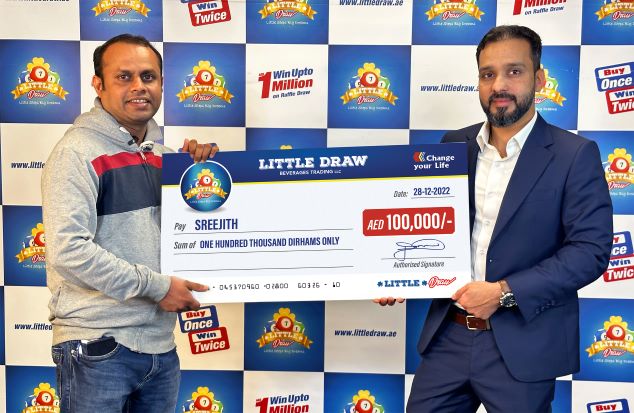 Dubai, United Arab Emirates, January 2023: Reach for the sky to make the stars your own! This is Sreejith’s philosophy to achieve the things he aspires in life. Sreejith, an Indian expat from Kerala, is the recent winner of Dh100,000 organised by Little Draw.

Sreejith has been working as a logistics coordinator for 14 years in Dubai and was overwhelmed when he was informed about his prize. Given the nominal price the raffle can be bought at, Sreejith has been purchasing the tickets for the last few months.

“I have been participating in varied competitions with the hope of winning. While I never won anything, I strongly believed that if I ever win, it will be a big prize. With this conviction, I started purchasing Little Draw’s Dh 10 raffle draw ticket on a regular basis, as it was not only easy on my pocket but also accessible at most retail shops,” said Sreejith expressing his joy for being a winner.

When Little Draw’s representatives dialled Sreejith, the call got disconnected. When he received another call, he thought that this was a scam. However, when his friends showed him the live video of the prize being announced in his name, he realised this was no hoax! He was speechless when he realised that he had won Dhs 100,000.

“My joy knew no bounds. I was so overwhelmed and still in a state of shock. For me, this win is very important. As a father of two daughters, I aim to invest this money for education and marriage of my daughters. I think this is the best gift I could have received and is perfectly timed to welcome the new year. The Rolling ball raffle is easy to play and offers multiple chances of winning. Always remember, destiny has its own way –goodness can knock at your door anytime. Just keep the faith strong, and believe in yourself,” added Sreejith.

Little Draw have recently changed their raffle format from biweekly to weekly draws, with the prizes being announced every Monday at 9:00 pm. The company has also increased their prizes without changing the price of the raffle.

“It is heart-warming to see the enthusiasm of these winners. While the draw is an attempt to change lives for the better, we plan to add several new features to the draw this year, which is only going to be bigger and better,” said Mr. Dennis Vargheese CEO of Little Draw.

Along with Sreejith, the list of other winner’s check can be found on Little Draw hall of Fame https://www.littledraw.ae/winners

You can get more information about the “Little Draw” at their official website at: www.littledraw.ae