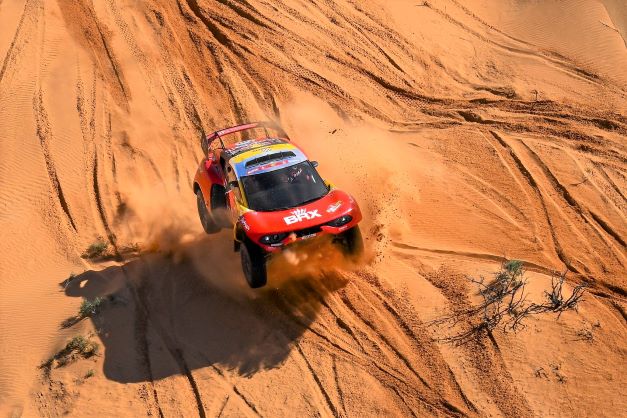 Loeb and Fabian Lurquin in their BRX Prodrive Hunter set the second fastest time on the 358km sixth stage from Ha’il to Riyadh to collect more valuable points in the World Rally-Raid Championship (W2RC).

Making it a rewarding day all round for the Prodrive Hunters, Guerlain Chicherit and Alex Winocq took fourth place on the day, with Lithuanians Vaidotas Zala and Paulo Fiuza recording the fifth best time.

Loeb’s climb into sixth place overall was a tribute to his powers of concentration, and the resilience of the BRX team, following a succession of misfortunes this week.

Lying second overnight, 14-time winner Stéphane Peterhansel went out after 212km following an accident which resulted in co-driver Edouard Boulanger being evacuated by the medical team to hospital in Buraydah to undergo further examinations on a back injury.

Peterhansel’s fourth-placed Audi team-mate, Carlos Sainz, had an accident at the same place and was carrying out repairs before re-starting, while Saudi’s Yazeed Al Rajhi plunged from third position when his Toyota ground to a halt after 216 km.

Three top five finishes on the day was a powerful reminder of the all-round capability of the BRX Prodrive Hunter, which brought back-to-back rally victories for Chicherit in Morocco and Loeb in Andalucia two months ago, to round of the 2022 W2RC.

Despite a flurry of punctures and other setbacks dropping the Hunters down the overall standings, Loeb had a hat-trick of Dakar stage wins in his sights for BRX yesterday before a hole on the side of a dune tipped his car onto its side.

The nine-time World Rally Champion and Stage 4 winner will now continue his pursuit of W2RC points on tomorrow’s 333km stage from Riyadh to Al Duwadimi, with BRX confident of  challenging for more stage victories up to the finish in Dammam on 15th  January.

Indian Expat Marks the New Year on a High Note with a monumental win of Dh 100,000 in Little Draw raffle