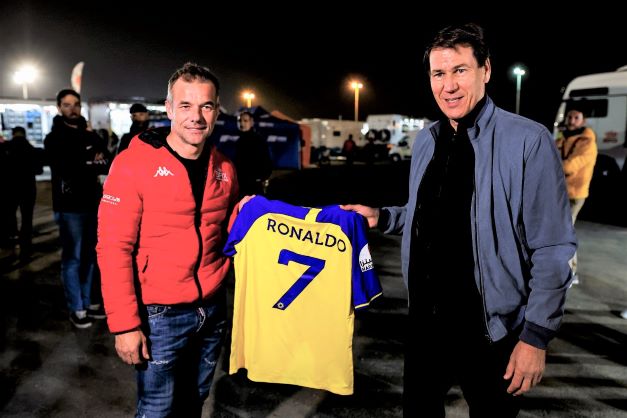 The shirt was presented to Loeb by Rudi Garcia, manager of Ronaldo’s new Saudi Pro League club Al Nassr, when he paid a visit to the BRX team at the end of the eighth stage from Al Duwadimi toRiyadh on Sunday evening.

Garcia then stepped inside the cockpit of Loeb’s BRX Prodrive Hunter to check out the car which the nine-time World Rally Champion and co-driver Fabian Lurquin had earlier taken to their second stage victory of the 45th Dakar Rally in Saudi Arabia.

It was also the fourth day in a row that three Prodrive Hunters had finished in the top ten, with Guerlain Chicherit and Alex Winocq taking sixth and Vaidotas Zala with Paulo Fiuza in 10th.

The result maintained a powerful climb up the rankings by Loeb following a succession of punctures and misfortunes which had dropped him from overall contention.

“It was a very good day, and a good way to end the first week,” said Loeb. “The feeling with the car was so good. It’s really nice to be like this in the car, I have to say.”

With today being a rest day in the Dakar, Loeb will be looking for another stage win, and more valuable World Rally-Raid Championship points, when the rally resumes with the 358km ninth stage from Riyadh to Haradh tomorrow.

Guerlain Chicherit, the winner last Tuesday, and Zala, also aim to be in the hunt for stage honours as the rally continues on its 8,550km overall journey to the finish in Dammam on Sunday.

The 67-strong BRX team in Saudi is helping drive alternative solutions for motorsport. The three Hunters being prepared for more action in Riyadh today run on Prodrive EcoPower biofuel created by Coryton from sustainable sources. This produces 80% less CO2 than petrol.

Get ready for MUSE magic at Dubai Summer Surprises

How Adventures in Colour are Transforming the Office Experience

What NRIs should know about retirement planning