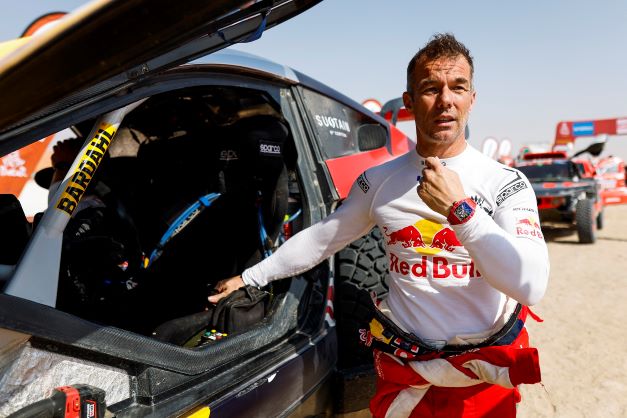 Shaybah, Saudi Arabia: 13th January, 2023: Sebastien Loeb has earned a vast array of titles in his career, and he now has a new one as master of the Empty Quarter after a fifth straight Dakar Rally stage win for Bahrain Raid Xtreme in Saudi Arabia.

Victory on today’s 185km 12th stage, which crossed some of the most spectacular and challenging desert terrain on earth, lifted Loeb and Fabian Lurquin into second place overall in their BRX Prodrive Hunter with two days remaining.

As on the first part of the Shaybah Empty Quarter Marathon stage yesterday, which he won despite stopping to change a wheel, the nine-time World Rally Champion was in control from start to finish as he got home with 3 mins 19 secs to spare over Mattias Ekstrom’s Audi.

He has now won half of the 12 stages completed. Guerlain Chicherit and Alex Winocq, who have made it seven stage victories overall for Prodrive Hunters so far, were fourth fastest today.

Starting the stage in third spot, 9 mins 37 secs behind the Toyota of Lucas Moraes, Loeb ended it leading the Brazilian by just over 2 mins as he guided his BRX Prodrive Hunter immaculately towards a second successive overall runner-up spot in the Dakar.

Setting the third fastest time in his Toyota, Nasser Al Attiyah has an overall lead of 1 hr 27 mins 10 secs. But after earlier misfortunes, Loeb has provisionally grown his lead in the World Rally-Raid Championship standings, with points gained for stage success, as well as overall finishes.

The two-day marathon stage in the Empty Quarter gave the Dakar Rally teams extra challenges in Saudi Arabia, with assistance trucks and mechanics barred from the overnight bivouac, and no internet connection.

After recording a fourth consecutive stage win yesterday, Loeb and co-driver Lurquin had to prepare their BRX Prodrive Hunter for today’s stage, while Chicherit and Alex Winocq, and Vaidotas Zala with Paulo Fiuza, were also busy with their Prodrive Hunters.

Despite a number of setbacks last week, Guerlain and Zala have both proved themselves to be top level Dakar challengers, and are in the record books after combining with Loeb to produce a first ever 1-2-3 stage finish for Prodrive Hunters.

The three cars are also setting an important trend in alternative motorsport solutions, as each Hunter is running on Prodrive EcoPower biofuel, which produces 80% less CO2 than petrol.

This is the UAE: Sheikh Mohammed hails success of 100 Million Meals campaign