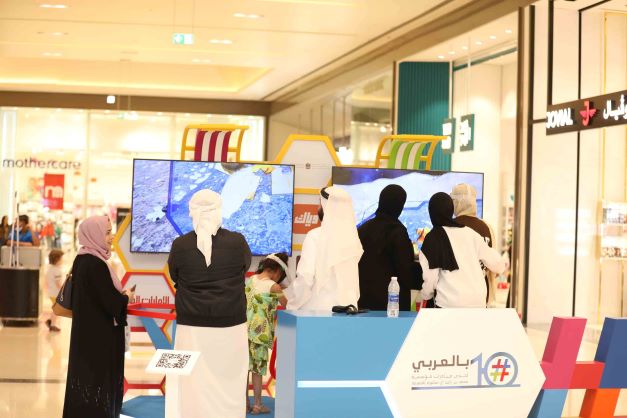 03 January 2023 – The Mohammed bin Rashid Al Maktoum Knowledge Foundation (MBRF) concluded the tenth edition of the ‘Bil Arabi’ initiative, which seeks to promote Arabic language use and significance, particularly in the Arab community. The initiative, which lasted for a week, coincided with World Arabic Language Day that is observed on December 18 annually. It is aimed at promoting the use of Arabic language on social media platforms, changing the norm of the usage of Arabic language, as well as demonstrating Arabic’s position as a global language and its efficiency in keeping up with developments and growth.

H.E. Jamal bin Huwaireb, CEO of MBRF, highlighted that this edition holds special significance as it has achieved significant success by conducting numerous activities, workshops, and panel discussions in the UAE and abroad, which have drawn a sizeable audience. H.E. further highlighted that the achievement has enhanced its stature as one of the most prominent international events and endeavours that seek to enhance and develop the function and relevance of the Arabic language.

H.E. added that this year’s edition largely contributed to promoting Arabic language among Arab speakers on various social media platforms, in addition to encouraging its use among the youth, as they often rely on other languages to communicate. He further emphasised that the initiative focused on solidifying Arabic language’s status as a crucial element of the Arab identity, culture, values, and legacy.

H.E. said: “We, at MBRF, are on constant efforts to advance knowledge development in the Arab World and we strive to empower and preserve the language by launching numerous initiatives and programs. The ‘Bil Arabi’ aims at promoting the Arabic language among the younger generations and preserving it as a cornerstone of the Arab World. We aim at strengthening our partnerships and collaborations with several local, regional, and international entities, and strive to develop innovative approaches in the upcoming editions of the ‘Bil Arabi’ initiative to encourage people to learn the Arabic language and understand its linguistic features.”

During the final day of the 10th edition of ‘Bil Arabi’ initiative, H.E. Jamal bin Huwaireb expressed his sincere gratitude towards His Highness Sheikh Mohammed bin Rashid Al Maktoum, Vice President and Prime Minister and Ruler of Dubai, for his constant support and efforts to promote the Arabic language and strengthening its status in the Emirati and Arab communities, as well as globally. H.E. stated that the directives of His Highness have been a guiding light for the dissemination of knowledge and strengthening the significant role of the Arabic language. H.E. expressed his gratitude to the Bil Arabi initiative’s partners and projects, as well as the UAE’s embassies and consulates overseas for their assistance in carrying out activities in numerous nations throughout the world. This includes – The UAE embassies in Kuwait, Bahrain, Greece, Belgium, Germany, Pakistan, United Republic of the Comoros, Spain, Serbia, France, China, Latvia, Norway, UK, South Korea, Russia, KSA; the UAE consulate in Hong Kong; The Ministry of Youth and Sports Affairs in Bahrain; the Ministry of Education in Bahrain; and the National Council for Culture, Arts and Literature in Kuwait.

Wake up and use the coffee: how waste grounds could be turned into fuel