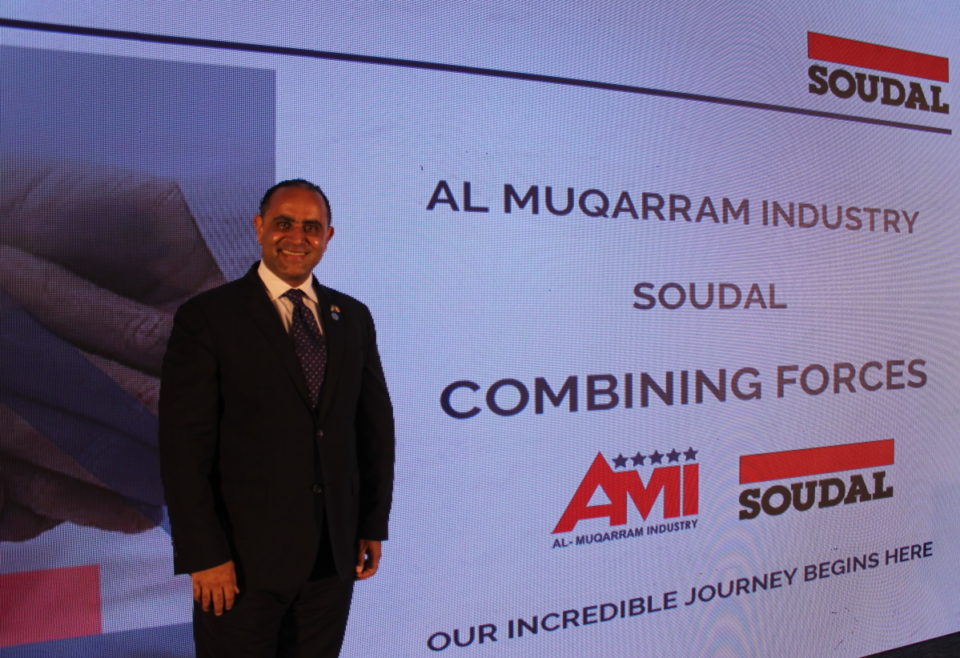 One of the world’s largest and most technologically advanced construction chemicals factories is to be set up in the UAE in the next three years, following the merger of the UAE-based Al Muqarram Industry (AMI) with the Belgium headquartered Soudal Group.

Founded in 1966 and headquartered in Turnhout, Soudal is the largest independent European manufacturer of silicones and other sealants, polyurethane (PU) foam, industrial adhesives, hybrid polymers, technical aerosols and chemical building products that are widely used in the construction, industrial and retail sectors, while Sharjah headquartered AMI, a company of the family-owned Al Muqarram Group, is a GCC leader in the production of a wide range of sealants, PU foam waterproofing coating, industrial adhesives, spray paint, automotive care, aerosol sprays and speciality tapes.

In an exclusive interview with MENews247, on the sidelines of an event held in Dubai on October 26, 2021 to formally announce the new Soudal-AMI collaboration, Safdar Badami, Managing Director of AMI, said the new production facility, featuring state-of-the-art automation, will occupy an area of 50,000-100,000sqm in as a yet undetermined emirate in the UAE. The production site will also house the largest construction chemicals R&D centre in the Middle East region powered by Soudal’s world-class technology and expertise.

When up and running, the new technology-driven production plant “will enhance AMI’s production capacity by more than 50% over the next three years, enabling the company to adequately fill any supply gaps in its UAE and international markets, as well as increasing the current workforce strength from 300 to near 700”, said Badami

Against the backdrop of Soudal operating 23 production sites across the world, Badami noted: “With two factories already operating all-out in Sharjah and in Umm Al Quwain in the UAE, AMI now becomes one of the largest producers in the Soudal portfolio. With its enhanced production capacity our new ‘factory of the future’ will not only enable us to better serve the current key markets of the Middle East, Africa and Asia, but also other countries and regions, such as Turkey, Eastern Europe, and North America.”

With the global construction chemicals market pegged at AED117 billion (€27.60 billion/$32 billion) in 2020 and with the market expected to grow to AED185.86 billion ($50.6 billion/€43.64 billion) by 2026, at a CAGR of 6% between 2021 to 2026, Dirk Coorevits, Managing Director of Soudal, pointed out that Soudal has traditionally focused on organic growth, developing new products, and attracting new customers.

Elaborating on the key factors that led Soudal to acquire AMI, Coorevits, who attended the Dubai event on October 26, 2021 to announce the new Soudal-AMI initiative, exclusively told MENews247: “They [AMI] have developed a nice range of products and they have the right people onboard. Also, being based in the GCC region, AMI has ready local access to the GCC region and neighbouring markets; putting us [Soudal] in a better position to expand even more in the Middle East region as a whole.”

According to Badami: “AMI is proud to be the first UAE-based construction chemicals company to partner with an international, technology- and sustainability-driven company and which comes at a time when the UAE is aggressively pursuing a policy of building an open, efficient and globally integrated business environment.”

Highlighting the fact that Soudal employs 3,654 people worldwide, and operating sales offices in 45 countries, Coorevits said Soudal’s overall ambition is “to become the global leader in the construction chemicals space, and having achieved double-digit organic growth in the past 20 years the company has also set its sights firmly on expanding in the UAE by investing in additional production and warehouse facilities.

Focussing on post-merger projections in the context of the UAE market, Badami said: “In the next five to 10 years we expect to register double-digit revenue growth year-on-year, as well as growing our exports in the next five years by 20% year-on-year – all of which will be achieved by an expanded product offering that will be introduced into the various international markets.”

Coorevits reiterated that as a “financially-sound family-run company” it is crucial that Soudal remains “independent and continues to have a long-term strategy and which helps explain why we have not had major management reorganisations; proof of which is my being with Soudal for the past 39 years!”

Tracing the history of AMI, Badami related that his father, Sabir Ali Badami, founded the Al Muqarram Group in 1999 as a “home-grown company to support the rapid modernisation and industralisation of the UAE with premium quality construction chemical materials never seen before in the UAE.”

From those early days, AMI has gone from exporting its product lines from three countries to more than 40 countries in 2021, said Badami.

As the construction industry booms in Saudi Arabia, with major government and private sector mega projects coming on-stream in line with the country’s ambitious Vision 2030 initiative, Coorevits said Soudal has been servicing the Saudi market directly from Belgium for the past 20 years, but now, with AMI onboard, plans are afoot to target the huge GCC country directly from the UAE [Sharjah], and, with the distinct “possibility of setting up a sales office in Riyadh or Jeddah”.

Despite the pandemic and when the company only shut down for two weeks, 2020 was actually AMI’s “best year for manufacturing”, said Badami, while laying proud claim to the Made in the UAE tag that goes with AMI’s world-class in-house Dolphin brand.

Singling out the main benefits of setting up commercial production and distribution operations in the GCC region, comprising a lack of tariffs and easy movement of goods and services across the economic bloc, Coorevits observed that the “GCC region is a huge economic centre and further expansion into this region for Soudal will be quicker than in what I call ‘Old Europe’.

“There are phenomenal growth opportunities in the region; the action is here! As we aim to be a global company we have to be present in a very strong position in the region and this is now a real possibility with AMI joining us.”

With Soudal having recorded a consolidated turnover of AED3.88 billion (€911 million/$1.057 billion) in 2020, Coorevits added: “Looking to the future, we anticipate that the GCC region will comprise 10% of our global turnover.”

Construction chemicals are specialty products used by the construction industry as they are essential for sustainable infrastructure and energy conservation, to increase durability of buildings, and to provide added fortification from environmental hazards. Construction chemical products, including concrete admixtures, similarly help in minimising the quantities of cement and water generally required during the construction process.