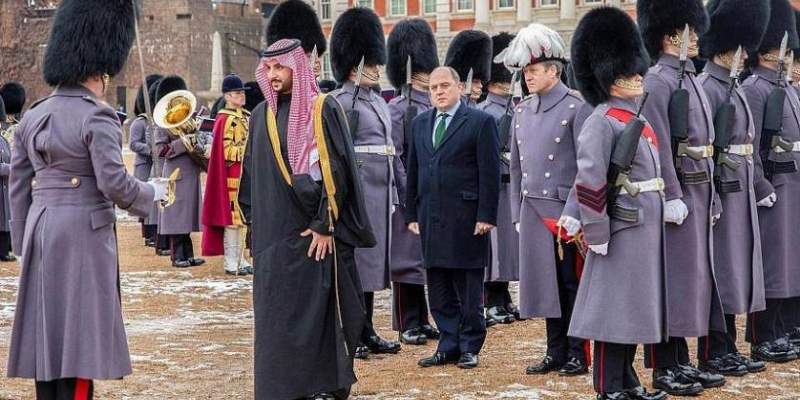 On December 13, 2022, the Minister of Defense of the Kingdom of Saudi Arabia, Prince Khalid bin Salman, met with the Secretary of State for Defense, the Rt Hon Ben Wallace MP, in London. A formal celebration was held for Prince Khalid at Royal Cavalry Guard Square, during which they played the Saudi royal song and inspected the guard of honour. A number of the high-ranking Saudi military and civilian officials, including the ambassador to the UK, Prince Khalid bin Bandar, as well as the chief of the General Staff- Lt. Gen. Fayyadh Al-Ruwaili, met to sign the defence cooperation agreement. The Defense Ministers discussed the 50+ year-long history of the close relations between the United Kingdom and Saudi Arabia in the field of defence, based on a mutual dedication to maintaining peace and stability and improving both countries and the region’s security.

The Signing Of The Defense Agreement

Both the Defense Secretary and His Royal Highness were happy to sign a Strategy for Defense Cooperation, which would strengthen defence and security cooperation between the two countries to deal with the security threats they both face. This will be done through constant communication, consultation, teaching, and improving skills. The UK’s longstanding commitment to collaborating with the Kingdom of Saudi Arabia to strengthen regional security is, thus, reaffirmed.

Secretary of Defense Ben Wallace said signing the Plan for Defense Cooperation was a pleasure. This brought the two countries even closer together and strengthened ties with one of their most important partners. According to him, it is a big step for the two countries as they try to improve their defence ties to make the whole area and themselves safer. Bin Salman also said that the Saudi Crown, who is also the prime minister of the Kingdom, is “committed” to modernising the Ministry of Defense to the highest levels and making sure that the localisation initiatives are carried out, which is in line with the Kingdom’s vision for 2030.

Some others who also attended the meeting include British Air Chief Marshal Sir Michael Wigston, British ambassador to Saudi Arabia Neil Crompton and British military attache to the Kingdom, Brig FAJ Piggott, and a number of officials.

Prince Khalid also went to Warton, Lancashire, England, to visit the headquarters of BAE Systems. There, he learned about BAE’s prospective plans, the Eurofighter Typhoon, and how to strengthen the alliance between BAE and the Saudi Armed Forces, which has been going on for 50 years. Afterwards, he went to the site for developing and designing aircraft systems, where he was informed about several cutting-edge aircraft technologies.

The Kingdom is seeking to localise military industries as part of its Vision 2030 policy to diversify the economy away from oil. The Kingdom’s Deputy Minister of Industry and Mineral Resources, Osama Al Zamil, said 2023 would see “a strong start” to the Kingdom’s national industrial strategy.