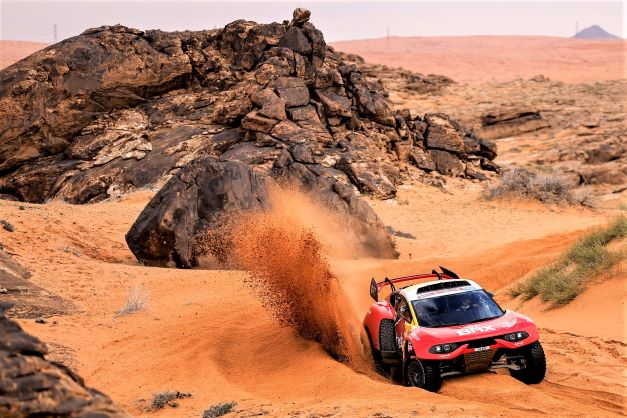 Loeb, whose overall victory hopes have been ruined by a spate of punctures and yesterday’s rear suspension failure, produced a superb drive alongside Fabian Lurquin in their BRX Prodrive Hunter to edge out Stephane Peterhansel’s Audi by 13 seconds on the 425km fourth stage.

Starting and finishing in Hail, the stage presented a classic battle between nine-time World Rally Champion Loeb and 14-time Dakar winner Peterhansel, with the BRX driver finally grabbing the lead after 327 km, and holding it to the finish.

His winning margin could have been much greater, as he was without power steering towards the end of the stage, and lost about ten minutes.

Loeb’s win, following second place on Monday, lifted him to provisional 14th overall, but more significantly brought him maximum points on the day towards his World Rally-Raid Championship (W2RC) bid with BRX.

Fourth fastest on the stage in his Toyota, Qatar’s Nasser Al Attiyah increased his overall lead to 18mins 18 secs over Saudi’s Yazeed Al Rajhi in another Toyota.

Guerlain Chicherit’s hopes of a second successive stage success with Alex Winocq in their Prodrive Hunter ended when they were forced to stop to carry out repairs after 342 km.

Orlando Terranova, third fastest yesterday in his BRX Prodrive Hunter with Alex Haro, made his way back to the bivouac after 10km because of back pains which returned following a hard landing 24 hours earlier.

The Argentinian had his fourth and fifth vertebrae fused ten years ago as a result of a bike injury on the Dakar. Feeling pain in the same area, he decided a medical check-up was needed.

After an X-ray at the bivouac, he was resting and was consulting his physio before making a decision on resuming tomorrow.

also returned to the bivouac for repairs to their suspension.

After the rain which flooded parts of the route yesterday and shortened proceedings, today’s stage sent the cars through an opening 100km stretch of dunes before switching to tracks that presented navigational challenges on the return to Hail.

There were no problems for Loeb, however, as he served notice that he intends go one better at the wheel of his BRX Prodrive Hunter in the W2RC after finishing runner-up to Al Attiyah last year.