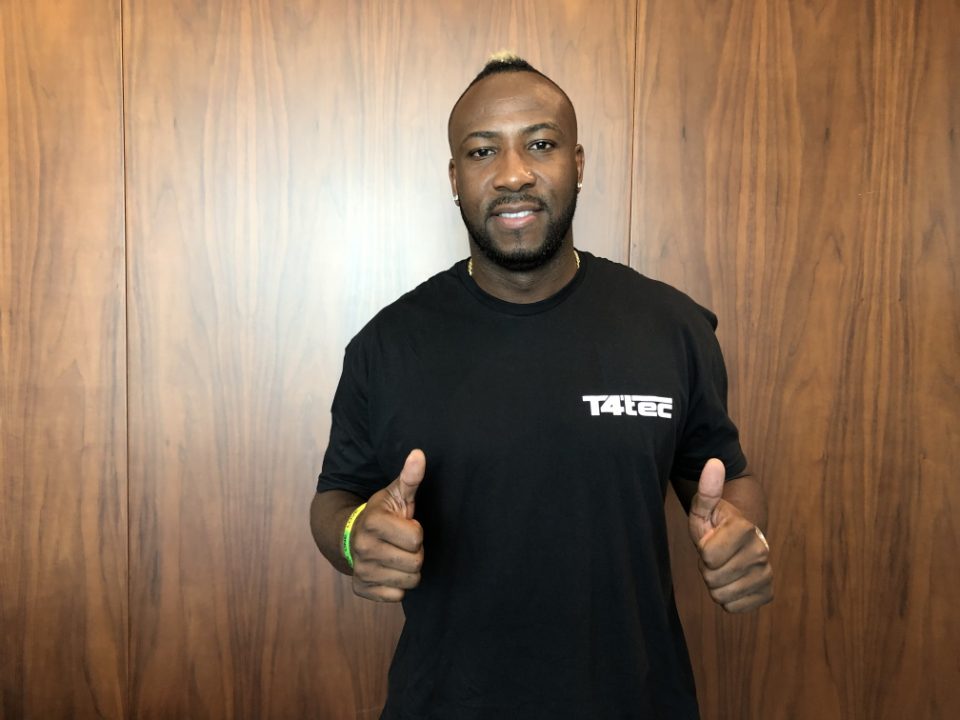 Cover Image: Andre Russell is the brand ambassador of T4tec as of November 2022. Credit: Arnold Pinto

Newly announced T4tec global brand ambassador Andre Russell sees great synergy between his status as the renowned world-class cricketer he is, and the UK-based premium affordable electronics brand he is now the face of.

Explaining the bespoke association he now enjoys with T4tec, the attacking all-rounder for the Kolkata Knight Riders says: “In my game, it is all about being the best, and making sure the fans are happy. The same holds true for T4tec; it [T4tec] is about giving people who cannot afford top home electronics brands premium quality at an affordable price.”

Currently in the UAE, representing Deccan Gladiators (reigning champions) in Season 6 of the Abu Dhabi T10 league, Russell, admits that as a professional cricket player who travels the world he constantly encounters all kinds of consumer technology brands, including in his home country of Jamaica in particular, and the wider Caribbean region, but, it is the “ethos of T4tec”, under its CEO, Dipesh Majithia, that is “close” to his heart.

The emotional attachment Russell, 34, has with the British home-grown brand is apparent when he states: “Throughout my career I was approached by many brands to represent them; wear their shirts kind of thing, but none of them felt the way I feel with T4tec. T4tec is indeed an amazing brand and I am happy to be part of the brand story, especially as the brand enters the Middle East market, beginning with the UAE.”

Speaking to MENews247 in an exclusive interview in Dubai, Russell says he looks forward to T4tec opening a large store in the UAE at the earliest, and given the market potential existing for the brand that designs its entire product line of smart TVs, wireless sound bars, cordless kettles, toasters and TV remotes in the UK.

A two-time T20 world champion and highly sought after by every franchise league in the world, Russell terms the Abu Dhabi T10 – the world’s first professional 10-over format league – as being a “relaxed franchise; where you feel at home, and where there is no pressure. I have previously worked with our head coach Mushtaq Ahmed, who is a humble person and who, even if you get out at the first ball, will say: ‘No worry buddy, it is okay.’

“When you have coaches like this it makes it easier on the players. Such coaches allow you to swing a bat, to be positive. After all, we all know what to do, and it is not the case that the coaches are there to tell us what to do,” says the right arm fast bowler in a measured voice, while seated at the Taj Dubai.

With the FIFA World Cup currently dominating sports headlines, 6ft 1in (1.85m) tall Russell acknowledges that he loves soccer as he used to play the sport and that he is currently rooting for Brazil in the mega global soccer tournament, adding: “I will make sure that if I do not watch a live match featuring Brazil then I will watch every minute of the match’s highlights.”

Any ICC India-Pakistan match holds fascination for Russell, as the TV viewership – numbering some 1.2-1.3 billion from the Indian Subcontinent – for such a match outshines even the FIFA World Cup and the Olympics, given the traditional cricket rivalry between the two South Asian nations, observes Russell, rated at a top speed of 138kmph on the cricket pitch.

Currently married to professional model Jassym Lora, Russell launched into a side career in late 2014 as a recording artist under the name of ‘Dre Russ’.

“I love music,” says the genial Kingston-born native, adding: “I have a couple of tracks that I am working on at the moment, and tracks in the studio that I have to put music to. Music was my passion a long time ago. But, when you get the confidence, and are brave enough to get into a recording studio and listen to a beat it’s a different matter altogether.

“How do I get ideas for my music? If I am chilling at home and I get a flash of an idea I voice-note it immediately; that way, I don’t lose the idea.”

Rounding up the exclusive interview, and drawing from his own experience Russell has some words of advice for aspiring professional cricketers.

“Never give up! Sometimes, you will get peak form and then lose that form. Whether it is batting or bowling, you will drop an easy catch. Never think you are not good enough. Always remember the good things when you are down.

“Remember good performances; that’s what motivates me, that’s what keeps me going. If I fail three games in a row I go back and watch a game where I scored sixes in a row. That allows me to say: ‘I can still do it. I am still the same player!’ Hard work, dedication and sacrifice; that’s my brief advice to aspiring international players.”