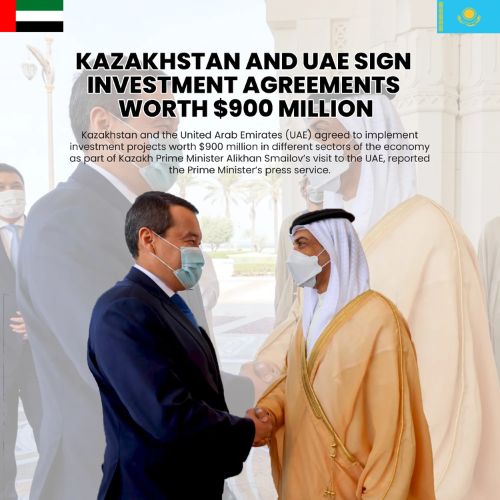 The United Arab Emirates (UAE) recently signed an investment agreement worth over $900 billion with Kazakhstan. Both countries engaged in investment discussions during the visit of Kazakhstan’s Prime Minister to the UAE. Alikhan Smailov, Kazakhstan’s Prime Minister, visited the Emirate to discuss with UAE’s President, Sheikh Mohamed bin Zayed Al Nahyan. The visit marked the existence of diplomatic ties between both territories for over thirty years.

What this investment agreement means for UAE and Kazakhstan

The investment agreement involves cooperation between the countries to develop projects in mutual areas of interest. During the visit, a delegation from Kazakhstan also presented investment opportunities worth over $6 billion to UAE companies. According to Kazakhstan’s Prime Minister, the Kazakhstan government has taken extra steps to create a conducive environment for Foreign Direct Investment (FDI) inflows with vast investment opportunities across areas like mining, oil and gas, and construction. Kazakhstan’s investment company, Baiterek Holding, also compiled a list of $100 million in agricultural investments that UAE companies could invest in.

Saudi Arabia’s President agreed with Kazakhstan on the need to strengthen bilateral ties between both countries to enhance infrastructural development. Some companies demonstrated their interest in tagging along on the Kazakhstan investment drive. For example, Mubadala Investment Company, the UAE’s sovereign wealth fund, expressed interest in investing in areas like mining and green investment within Kazakhstan territory.

The number of investment agreements that totalled $900 million is numerous. They include an MoU between BI Group and International Community Schools for creating a private school in Kazakhstan’s capital and an export contract for the supply of lamb chops between Optograd LLP and Laser Meat Trading EST. Kazakhstan’s Institute of Standardisation also signed an MoU with GulfTIC to certify the country’s goods across the Gulf.

The UAE is one of Kazakhstan’s major trade partners. For instance, the UAE exported over $600 million in goods to Kazakhstan in 2021. In 2020, Kazakhstan exported goods worth $378 million to the UAE. This move to gear bilateral investments between the countries will enhance trade turnovers and set the tone for stronger commercial ties.