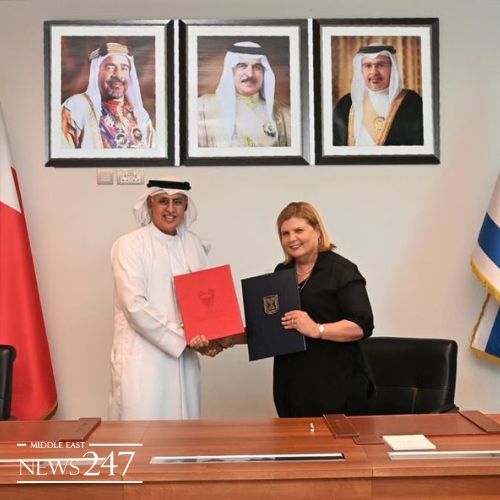 Bahrain and Israel in Talks for Free Trade Agreement :

Bahrain and Israel recently announced that they are in talks to establish a free trade agreement. Israel’s Ministry of Economy disclosed the news. The Israeli Economy Minister, Orna Barbivai, stated that the free trade agreement would help strengthen commercial ties and diplomatic relations between Israel and Bahrain. It is equally expected to eliminate trade barriers and increase investment opportunities for businesses in both countries. The agreement will address issues like trade in services and goods, standardisation, customs requirements, e-commerce, government procurement, and intellectual property dynamics. The trade agreement is also expected to enhance the trade flow between Bahrain and Israel. In 2021, the trade flow between both countries totalled $7.5 million. While this number was relatively low, there are hopes that the agreement will enhance the trade count. This agreement comes after Israel normalised ties with Bahrain two years ago.

In 2020, Bahrain officially agreed to normalise its relations with Israel. The normalisation was officially executed under a US-brokered deal by former President Donald Trump. For many years, the relations between Israel and other Arab states were strained mainly due to the Israel-Palestinian conflict. However, 2020 marked the year Israel established diplomatic ties across the Gulf. Accordingly, Israel normalised ties with the United Arab Emirates (UAE) before establishing diplomatic ties with Bahrain. So far, Israel has also normalised relations with countries like Sudan and Morocco. While trade has been steady between Bahrain and Israel since the normalisation agreement, it has mainly been minimal. For instance, trade flows between the countries peaked at merely $7.5 million in 2021, with $5 million in exports from Israel and $3 million from Bahrain. On the other hand, the UAE exported goods worth over $120 million to Israel in the same period. The Bahrain-Israel free trade agreement is expected to change this narrative. Given that trade barriers are likely to be lifted with the deal, businesses in both countries will have free market access. The export count between both countries is also expected to increase significantly. However, Bahrain is not the first country to enter a free trade agreement with Israel. After Israel’s efforts to normalise ties with more Arab countries, the country equally made moves to boost commercial relations across Gulf Arab states. The UAE is one of the countries Israel successfully established commercial ties with. Earlier this year, Israel signed a free trade pact with the UAE and agreed to eliminate most of its tariffs. The trade agreement is expected to boost Bahrain-Israel trade to over $10 billion. While details on the planned Bahrain-Israel free trade agreement have not been released, specific provisions will likely be repeated if the deal is modeled after the UAE-Israel agreement. For instance, a significant proportion (likely over 90%) of trade tariffs will be lifted across strategic sectors like agriculture and medicine. In addition, both countries are also expected to agree on the free movement of services. Ultimately, the agreement will likely help Israel establish a solid commercial foothold and equally contribute to Bahrain’s economic development. Check Out The News On Latest Topics.
previous post

Kuwait to indefinitely suspend flights to the UK

Bentley Systems Deepens Commitment to Government Agencies in the U.S. with Carahsoft Partnership