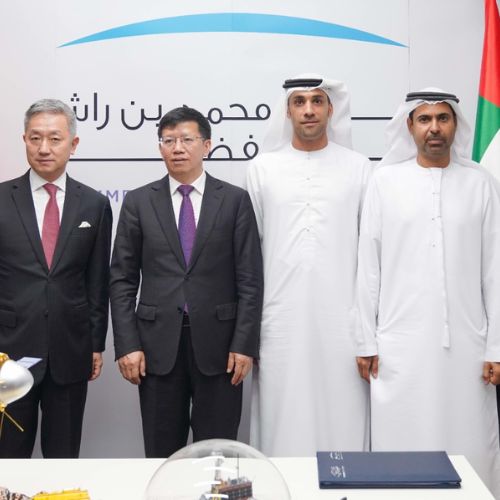 China and the UAE Join Forces to Secure the Country’s Property on the Moon :

In a never seen space collaboration between China and the UAE, both countries have agreed to the former’s assistance in landing the UAE’s Rover from the Moon’s surface. This news comes after long considerations of expertise, regulatory basis, and capacity on the part of both parties.

What are the Specifications of the Agreement?

The UAE and the Republic of China agreed to aid the successful landing of the UAE rover on the Moon. China is known for its outstanding lunar exploration program, and the country has recorded previous successes, like the landing of its spacecraft on the Moon for the first time in 2013.

The UAE thought it wise to access the Moon via China’s spacecraft rather than expending more costs on constructing its lander. It is believed that the agreement between the countries will signify the beginnings of future collaborations between them. Representatives of the China National Space Administration and the Mohammed bin Rashid Space Centre gathered on the 16th of September 2022 to sign the Memorandum of Understanding that houses the agreement’s terms between countries.

The UAE’s Rover is currently undergoing final vibration and thermal vacuum testing procedures in France and is set to launch at the Kennedy Space Centre in Florida in November. After testing, the Rover would be transported to Germany, where it would be in collaboration with the Hakuto-R Mission 1, a Japanese land responsible for the transportation of the Rover to the Earth’s surface.

Regarding preparations for the mission, Hamad Al Marzooqi, Director in charge of the Moon mission, stated that the preparations are complete on UAE’s part, and the country is assured of the model and quality of its Rover. All that is left is to begin the launch of the Rover in November. It is estimated that the Rover will take three months to get to space after its launch.

It is particularly encouraging to see that plans for the launch of the Rashid Rover are underway and almost ready. This news is a testament to the UAE’s consistent resilience and preparation, which has distinguished them as a major Arab country. The UAE’s launch is also a direct achievement of the country’s goal to land on the Moon by 2024. Additionally, The Mohammed bin Rashid Space Centre is set to build more fully-equipped rovers to embark on similar projects more often in the future. However, the Rashid Rover’s mission, for now, is to examine the Moon’s surface using a thermal imager and microscopic image for 14 days. The Rover is also set to use the Langmuir instrument to study the electrically induced Moon’s surface.