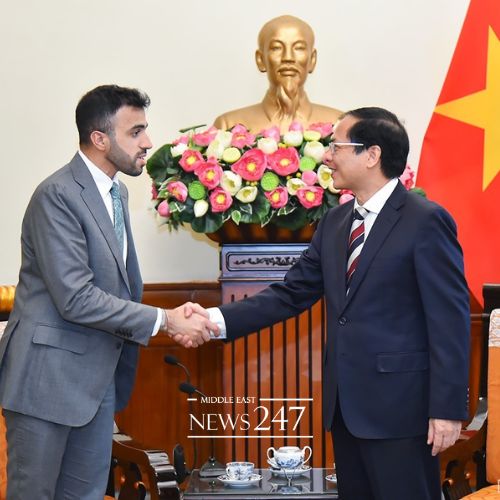 UAE in Talks with Vietnam for Commercial Cooperation :

Hanoi, the capital city of Vietnam, recently announced its intention to expand its commercial ties with the UAE. Nguyen Van Phong, the Deputy Secretary of the Hanoi Party Committee, made this statement. He reiterated Hanoi’s desire for commercial cooperation with Dubai authorities when he was on a working visit to the UAE.

During the visit, the Dubai authorities were primarily receptive to the idea of expanding the existing trade and commercial relations between both territories. They also expressed their delight at the prospect of strengthening the diplomatic ties that have existed between Vietnam and the UAE since 1993.

Representatives of Dubai and Vietnam also agreed that both countries had numerous similarities, which could translate into colossal investment and commercial potential for residents. Hanoi and Dubai are currently members of UNESCO UCCN, the Creative Cities Network of the United Nations Educational Scientific and Cultural Organisation. This membership is tied to the design subset, creating an obligation on both territories to support each other in the creative sector.

However, apart from the investment potential across the creative sector, both Hanoi and Dubai equally have thriving tourism markets. This year alone, over 13.8 million tourists have visited Hanoi. With these numbers, Hanoi has earned more than $1.6 billion in the first nine months of this year. Dubai has an even much bigger tourism market.

In the first half of 2022, the UAE UAE recorded a revenue of over $5 billion. This shows immense potential for cross-city tourism investment across Hanoi and Dubai. However, during the meeting, representatives of Hanoi and Dubai agreed to cooperate within their respective tourism markets. This cooperation would involve the promotion of tourism through cultural exchange activities and collaboration between the travel agencies of both cities.

Phong also suggested that both countries sign a Memorandum of Understanding (MoU) to facilitate future collaborations further. These cooperation talks are mainly unsurprising, as the UAE is a significant trading partner of Vietnam. Between January and August 2022, the trade between Vietnam and the UAE crossed over $3 billion. The Vietnamese Trade Office has also intensified efforts to encourage domestic companies to export goods to the UAE and take advantage of the country’s commercial opportunities.

The UAE is one of many countries with which Vietnam has tried to establish solid commercial relations. In late October, Vietnam signed a cooperation agreement with China. This agreement covered multiple sectors, including trade, environmental protection, justice, and local affairs. Notably, tourism is also one of the focus sectors in the contract.

On the flip side, the UAE has also been intentional about expanding its commercial ties beyond the Middle Eastern region. In July, the country signed an energy cooperation deal with France. This deal was targeted at facilitating strategic cooperation with France across the energy sector.

Overall, both Vietnam and the UAE are optimising efforts to strengthen their commercial footprint and increase opportunities for their citizens. Given the global market conditions, these moves are pretty laudable.